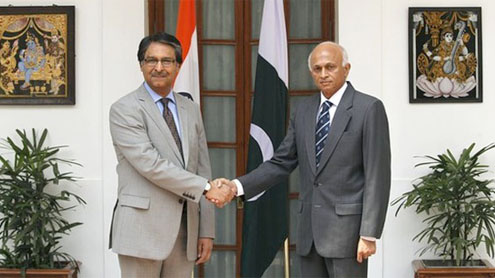 NEW DELHI: India and Pakistan ended two days of peace talks Thursday, vowing to keep their dialogue on track despite renewed tensions over the alleged role of Pakistani “state actors” in the 2008 Mumbai attacks.

The talks in New Delhi were clouded by charges arising from India’s recent arrest of Sayed Zabiuddin Ansari, suspected of being a key handler for the Mumbai attackers who killed 166 people in India’s financial capital.India says Ansari has admitted helping to coordinate the deadly assault from a command post in Karachi, and his testimony has renewed Indian accusations that “state elements” in Pakistan were involved.At a joint news conference, Jilani insisted the charge was baseless.

“I would very strongly reject any insinuation of any involvement of any state agency in acts of terrorism in India,” Jilani said.“If we keep accusing each other that will be of no benefit and we will not find any result,” he added.His remarks were a response to specific allegations levelled on Wednesday—as the foreign secretary talks began—by Indian Home Minister P Chidambaram who argued that Ansari’s evidence could only lead to one conclusion.“It is no longer possible to deny that though the incident happened in Mumbai, there was a control room in Pakistan before and during the incident,” Chidambaram said.

“It is clear that (Pakistani) state actors were there,” he added.Pakistan has indicted seven people for their alleged role in the Mumbai attacks but their trial, which began in 2009, has been beset by delays.Addressing Thursday’s news conference, Mathai stressed that bringing those guilty for the Mumbai carnage to justice “would be the biggest confidence-building measure of all”.“We shall pursue this matter to its logical conclusion,” Mathai said of the Indian investigation into Ansari’s testimony.

India and Pakistan have fought three wars since the sub-continent was partitioned in 1947.New Delhi suspended a four-year peace process with Islamabad after the attacks on Mumbai by 10 gunmen, and the full peace dialogue only resumed in February last year.Despite the renewed tensions over the Mumbai attacks, and the recent political upheaval in Pakistan, Jilani insisted that nothing should be allowed to prevent the peace process going forward.“There should be absolutely no setback, because a setback is something we cannot afford,” he said. – Dawn