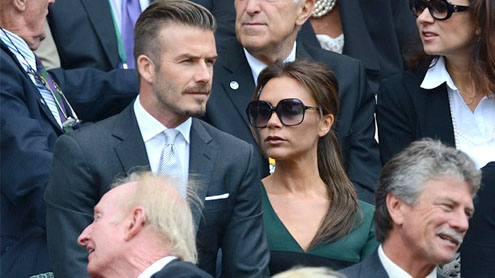 Matt Smith was among the pre-match interviewees on Centre Court, and for a while it seemed we been transported to one of those parallel universes into which Doctor Who likes to slip with insouciant ease.

We had already been taken back through time, Sue Barker steering the Tardis back to the 1930s by invoking Fred Perry and Bunny Austin for the 9,432nd time in two days. Yet when the match began, with Andy Murray imperious and Roger Federer a bag of nerves, this was a Bizarro World in which the natural order was inverted.

“Oh God, I’d resigned myself to defeat,” said a friend as Murray broke to take the opening game, “and he starts like this. What kind of horror are we in for here?” It would be that peculiar brand of sporting horror to which the subjects of an absentee Brittanic Majesty should be thoroughly inured, but somehow never quite are.A shot of David Beckham in the crowd provoked the obligatory penalty shoot-out analogy. The crushing sense of inevitability would be the same, albeit mercilessly drawn out over four hours rather than a few minutes.

History will record that the match turned in the two closing games of the second set, which Murray should have won, but lost. As Henry Ford knew, however, history is bunkum. This final in fact turned on Tim Henman’s neckwear. Before the match, he wore his All England Club tie.Yet when the camera panned to the commentary box while the roof was closing, there he sat – beside the ambulance chasing law firm advertiser Andrew Castle, and Boris Becker looking every inch a ringer for the younger Auric Goldfinger – in a sepulchral black tie. The funeral had begun.

As Murray mounted a doomed rearguard in the third, the chief mourners in the Royal Box wore increasingly pained expressions. David Cameron threw his head back in frustration, and for once we most certainly were all in this together.An empathetic frown cemented itself, meanwhile, on the brutal features of Alex Salmond. Murray was palpably swimming upstream now, and although the commentators were still too polite to say so, it was clear that he would not be spawning a WImbledon trophy.The audience tried to lift him, but although Becker described it as “like a football crowd”, it was no such thing. If only, you felt. If only the committee had raffled every ticket to the supporters of Chelsea, Leeds United and Cardiff City, even the ice cool Federer might have been petrified to defeat.

Instead, the requisite stiff upper lippery was personified by the Duchess of Cambridge and The Other Middleton Girl, Pippa, who share a genetic gift for grinning winsomely at the most dismal moments. Ma Murray does not, and when her boy was broken early in the fourth set, Judy looked not just like a warder in Prisoner Cell Block H, but a warder facing a mass break-out after dropping the keys in a cell.

“You cannot fail to be impressed by his spirit and determination,” said Castle, gently breaking it to us that the prognosis was not good. What palliative care there was, as Federer closed in on his seventh title, came from the occasional flash of Beckham’s comedy moustache, seemingly stolen from Stephen Fry’s General Melchett. As for the consolation, that takes a bit of finding after an afternoon to underscore that sense of being cursed. But at least Mrs Beckham’s proud, unbroken record of never smiling in public wasn’t put to the ultimate test.In the parallel universe that teased us for a while, no doubt Victoria was quite the Cheshire Cat as Andy Murray paraded the trophy. Here in the real world, the misery endures. – Thetelegraph