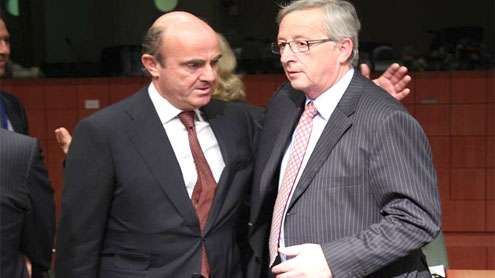 BRUSSELS: Euro area finance ministers agreed early Tuesday on the terms of a bailout for Spain’s troubled banks, saying that €30 billion ($36.88 billion) can be ready by end of this month.

The finance ministers for the 17 countries that use the euro as their official currency will return to Brussels on July 20 to finalize the agreement, having first obtained the approval of their governments or parliaments, eurozone chief Jean-Claude Juncker said early Tuesday morning.As part of the agreement with Spain, finance ministers from all 27 European Union countries are expected Tuesday to approve a one-year extension, until 2014, of Spain’s deadline for achieving a budget deficit of 3 percent.

There will be specific conditions for specific banks, and the supervision of the financial sector overall will be strengthened, Juncker said.”We are convinced that this conditionality will succeed in addressing the remaining weakness in the Spanish banking sector,” he said.Dutch Finance Minister Jan Kees de Jager said the agreement should be finalized soon.

“We have a tentative deal on the bailout conditions for a bailout of Spanish banks,” De Jager said. “The total will likely be 100 billion euros. Some countries like the Netherlands, Germany and Finland need to get parliamentary approval. We hope this can be wrapped up within a week.”The exact amount of the bailout will likely not be known until September, when individual examinations of different Spanish banks have been completed.

De Jager said Madrid’s partners agree that “financial sector reforms in Spain must be ruthlessly implemented. These reforms include notably a cap on salaries of bank executives and a ban on bonuses.”However, he said a system of EU-wide banking supervision still needs to be worked out.”There are still differences over this,” he said. “The details will be worked out by the end of the year.”

But on Monday, before the eurogroup meeting began, Mario Draghi, the chief of the European Central Bank, said he was confident that a banking union in the European Union would be achieved.”The first thing to be created will be the supervision,” Draghi told a committee of the European Parliament. “We are talking about the long-term sustainability of the European monetary union. We are going as fast as we can. It is better to do things right than in a hurried fashion. We certainly want to see this thing wrapped up by the end of the year,” he said, referring to banking oversight.

“By the end of this year we will have something that is not perfect, but achievable.”Officials also announced that Klaus Regling, a German economist who currently heads the temporary EU bailout fund, had been chosen to head the European Stability Mechanism — the permanent bailout fund meant to head off instability in the eurozone.Regling, 61, will take charge of a bailout fund meant to reassure markets that the European Union will stand behind its weaker members. – Yahoonews