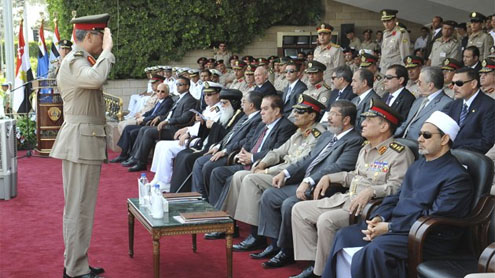 CAIRO: A new showdown loomed in Egypt on Monday as the country’s highest court stood by its ruling that dissolved parliament last month, challenging the new Islamist president’s plans to reconvene the lower chamber in defiance of the military.

If he goes ahead, Mohammed Morsi would be taking a dramatic step away from the outreach that characterized his first days in office. It’s a tough fight, though, and the president could lose it along with more of his already diminished powers.The military, which handed power to Morsi on June 30 after ruling the country for 16 months, delivered a thinly-veiled warning to the president, saying it would continue to support the country’s “legitimacy, constitution and law” — language that means it will not stand by and watch the rulings of the country’s top court ignored or breached.

At the same time, the Supreme Constitutional Court sent out a clear signal that it will not bow to Morsi’s wish, saying in a statement after an emergency meeting on Monday that its June 14 ruling to invalidate the Islamist-dominated parliament was final and binding.”Morsi’s move sets the stage for a potentially very serious political and constitutional crisis,” said Michael W. Hanna, an expert on Egypt from the New York-based Century Foundation.Morsi, through his spokesman Yasser Ali, insisted his decision to reconvene the 508-seat chamber on Tuesday was an “assertion of the popular will.”

His presidential decree also calls for new parliamentary elections after a new constitution is adopted, something that is not expected before the end of the year — in effect according legitimacy to a legislature the country’s highest court ruled to be invalid.In its ruling last month, the supreme court determined that a third of parliament’s members were illegally elected under a law that allowed candidates from political parties to compete for seats that had been set aside for independents. Based on that verdict, the then-ruling military disbanded the house, in which Islamists controlled more than 70 percent of the seats.

In the days that followed, the generals pushed through a series of decrees that gave themselves legislative powers, as well as control over the drafting of a new constitution and the national budget. It also stripped Morsi of significant presidential powers.The high court was to rule Tuesday — the same day parliament was set to reconvene — on three cases questioning the legality of the president’s order.The dispute over the fate of parliament has divided the nation just as Egyptians were looking forward to a semblance of stability after the tumult of the 17 months since the ouster of longtime authoritarian ruler Hosni Mubarak. Egypt has seen a dramatic surge in crime, deadly street protests, a faltering economy and seemingly non-stop strikes, sit-ins and demonstrations.

Some of the youth groups who engineered the uprising that toppled Mubarak sided with Morsi, viewing his move as an attempt to curtail the military’s powers. Others saw it as another bid by Morsi’s Muslim Brotherhood to pursue its own interests rather than the nation’s.”Morsi’s decision is going to give us a huge problem,” predicted Hesham el-Kashef, a 23-year-old lawyer and rights activist. “He is drowning us in legal problems and it is all for the sake of the Brotherhood.”Many liberal lawmakers said they would either boycott Tuesday’s session or wait for the constitutional court ruling on Morsi’s decree before they decide.

“How can we go and attend in violation of a court ruling?” said Imad Gad, a liberal lawmaker. “There must be respect for the law and for state institutions.”Morsi also received harsh criticism from the country’s judiciary.Ahmed el-Zind, the head of the powerful association of judges, gave Morsi a 36-hour ultimatum to rescind his decision and offer an apology to judges or face what he called “harsher” options.Parliament remained under police guard, though it was unlikely the security forces would try to prevent lawmakers from entering the central Cairo building on Tuesday, unless the supreme court declares Morsi’s decree unconstitutional before the session starts.

It is because of this possibility, according to the official Middle East News, that speaker Saad el-Katatni brought forward the start of the session by two hours.Morsi’s decision poses a series of legal and political challenges.If the chamber is allowed to sit until new parliamentary elections are held, every piece of legislation it adopts would be challenged in court. Also, by reinstating the legislature, the country would have two sources of legislative powers: the military, under its June 17 declaration, and the legislature.

Morsi’s own standing as a unifying figure in the wake of months of turmoil would also suffer if he were to be locked in a battle with the military and much of the judiciary.Earlier Monday, Morsi appeared to be trying to ease the appearance of a growing showdown, appearing with the country’s top generals at a military graduation ceremony. Morsi was seated between the head of the military council, Field Marshal Hussein Tantawi, and Chief-of-Staff Sami Anan. All three sat grim-faced for most of the ceremony, though Tantawi and Morsi exchanged a few words on the reviewing stand.

Some experts noted the delicate path Morsi must tread.”The particular difficulty of the moment is that Morsi is now in a position where he needs to steer the country towards stability and legitimacy without negating the constitutionality of the rule of law,” said Karen Greenberg, Director of the Center on National Security at Fordham Law School, New York.”It’s an unenviable position but it is no less than one would have expected for the ambitious task for which he was elected,” she said.