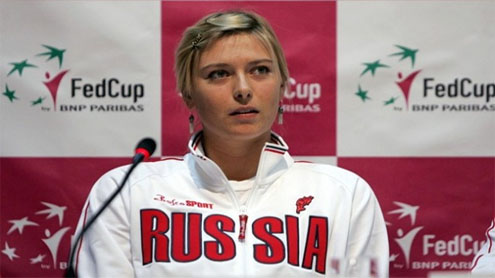 Tennis star Maria Sharapova has been handed the honor of becoming the first woman to carry Russia’s flag at the opening ceremony of an Olympic Games.

The 25-year-old will be competing in her first Olympics at London 2012, where she will play in the women’s singles tournament.”I wasn’t aware that I am the first woman but what a personal honor to be representing Russia,” she told CNN.”I am grateful for the sincere support from my family, friends and fans from home and across the globe. I’m truly proud and humbled to represent a country that is full of hopes and dreams.”

Sharapova has battled her way back to the top of women’s tennis after two years of shoulder problems, returning to No. 1 in the world rankings after completing a career grand slam by winning last month’s French Open.She lost top spot to Victoria Azarenka of Belarus this week after a surprise defeat in the fourth round at Wimbledon dropped her to No. 3, but has the chance to make amends as the Olympic event will also be held at the famous grass-court venue.”This year’s upcoming Olympics in London holds special meaning to me as this will be my first foray into the Games,” Sharapova said.

“It’s a remarkable opportunity to not only compete in such a historically prestigious sporting moment, but I am looking forward to sharing this Olympic experience with fellow athletes around the world.”Sharapova, who will reportedly marry basketball star Sasha Vujacic in November after the end of the tennis season, has been based in the United States for most of her life.She has played three times for Russia’s Fed Cup team, all in quarterfinal ties, winning three of her four singles rubbers.

Sharapova did not qualify for the 2004 Olympics in Beijing, despite winning her first grand slam title at Wimbledon as a 17-year-old. She missed out in Beijing in 2008 due to injury, and compatriot Elena Dementieva — who has since retired — won the women’s gold.Russia first took part at the Summer Olympics in 1912, but did not appear again until 1952 as the Soviet Union. Since then the honor of carrying the flag has usually gone to male gold medal-winners.This year, Serbia and Spain will also have a tennis star as flag-bearer as men’s world No. 2 Novak Djokovic and Beijing champion Rafael Nadal have been given the role by their respective countries. – CNN