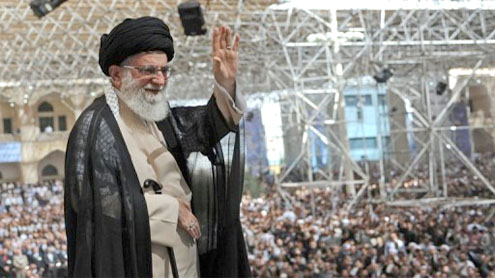 Iran is “100 times stronger” today than 30 years ago despite the multitude of Western sanctions imposed since the 1979 Islamic revolution, Iran’s supreme leader Ayatollah Ali Khamenei said on Wednesday.

“Westerners are making much hype about sanctions against Iran but they don’t understand that they have vaccinated the Iranian people themselves by imposing sanctions over the past 30 years,” Khamenei said, quoted by state television.Iran “has resisted all sanctions and is now 100 times stronger than 30 years ago,” he said in a speech to a women’s international conference on “Islamic awakening” in Tehran.

The United States and European Union have implemented an oil embargo against Iran, leading to a substantial decline in exports of crude from which the Islamic republic draws two-thirds of its foreign exchange earnings.Iran since 2010 has been subject to severe international economic sanctions over its controversial nuclear programme, which Western powers believe masks an atomic weapons drive despite repeated denials by Tehran.The sanctions are focused mostly on the banking and oil sectors. Official propaganda asserts the sanctions are ineffective. -Yahooonews