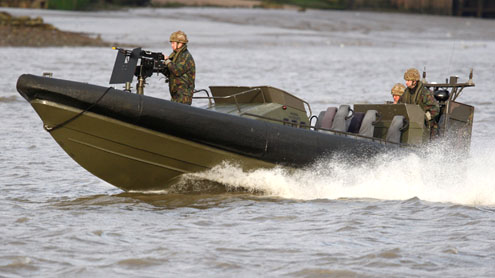 The British Army has been ordered to provide more troops for the Games to make up for a shortfall in staff provided by private security contractors.

The Ministry of Defence last year said that 13,500 military personnel would be assigned to Olympic duties, with 7,500 of them in security roles at Olympic venues.It is understood that another 3,500 troops have now been told to prepare for duties at Games sites. More troops have now been given ‘notice to move’ orders, an Army source revealed.

Defence sources said that the total military contribution to the Games is now likely to reach 20,000 personnel – more than a tenth of the entire Armed Forces. Many of the troops assigned to the Games are Afghan veterans. They will be ordered to carry out rudimentary security work including bag searches at venue entrances.Commanders are particularly angry about the conditions in which Service personnel are being required to work.Troops who arrived at Olympic sites this week for security duty were said to have been left without basic facilities including toilets.

One senior military officer said the Olympic work was “demeaning” to Service personnel.”It is very demeaning that highly professional soldiers and Marines who have served two or three tours of duty in Afghanistan now find themselves doing bog-standard security checks because the Olympic organisers can’t get their act together,” he said.“The organisers have failed to deliver on their promise to make their own security arrangements.”It is understood that Gen Sir David Richards, the Chief of the Defence Staff, has personally raised concerns about the management of Games security with Olympic organisers.

Defence chiefs are preparing to make up a shortfall they say has been left by G4S, the private security firm contracted to provide civilian guards for the Games. The company is said to struggling to meet the required numbers of civilian staff.The Home Official initially estimated that 10,000 security staff would be needed for London 2012, but last year, that estimate was increased to 23,500.G4S was initially contracted to provide 2,000 security staff . The contract has been renegotiated and the firm is now obliged to provide 10,400 guards and train 3,300 students and 2,500 unpaid volunteers.

Locog, the organising body for the Games, said: Locog said: “We would be surprised if there are concern being raised about the involvement of military personnel as all parties have signed up to the security plan. The allocation of military personnel was based on clear agreement of their roles and responsibilities.”G4S said: “We have encountered some issues in relation to workforce supply and scheduling over the last couple of weeks, but are resolving these every day and remain committed to providing a security workforce for the start of the London 2012 Games.”

The MoD said: “Military personnel being deployed as part of the overall police and civilian-led Olympic security effort are providing niche capabilities as well as taking on a range of vital roles from air security, to the provision of bomb disposal and maritime security capabilities.”Those personnel carrying out venue security roles will conduct important tasks such as vehicle screening, pedestrian screening as well as perimeter security tasks. All of this will help to keep the public safe at the world’s biggest sporting event.”

The security shortfall has led to tensions in Whitehall, with MoD sources privately blaming the Home Office for “cocking up” the initial security contract. Dame Helen Ghosh, the senior civil servant at the Home Office, admitted last year that the 10,000 figure had been a “finger in the air” estimate. – Thetelegraph