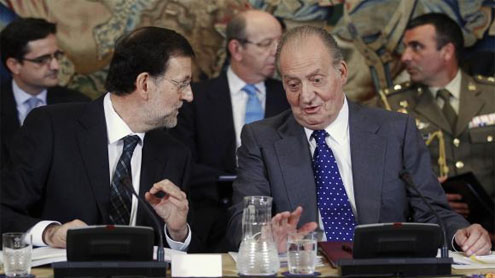 Rajoy, interrupted by howls from opposition members as he outlined the cuts, performed a U-turn by ramping up value added sales tax having promised he would not raise it, and took an axe to state expenditure.”These are not pleasant measures but they are necessary,” said the bearded 57-year-old leader of the conservative Popular Party.Spain’s premier said new spending cuts and other measures including notably a rise in value-added tax would bring in 65 billion euros by the end of 2014 to help trim the annual deficit.

The European Union had demanded a VAT rise along with a series of other tough measures as it gave Spain an extra year to bring its bulging public deficit back to agreed limits.The interest rate which Spain has to pay to borrow for 10 years eased fractionally as the measures were announced but remained at a crippling level of 6.743 percent from 6.773 percent on Tuesday.

Among the new measures announced by Rajoy: — VAT goes up to 21 percent from 18 percent, and the reduced rate on some products such as food goes up to 10 percent from eight percent. A special four-percent rate on basic needs such as bread is untouched.— Public administration is to be reformed to save 3.5 billion euros, including a drastic cut in the number of publically owned enterprises and a 30-percent cut in the number of local councillors.In Brussels, euro zone ministers agreed the previous day to provide a first slice of 30 billion euros for Spain’s banks this month, with 100 billion euros potentially available in all.

The 17-nation single currency bloc agreed, also, to extend a deadline for Spain to cut its public deficit to the European Union’s limit of 3.0 percent of gross domestic product by one year to 2014.As Spain struggles with recession, the bloc agreed to relax the deficit target to 6.3 percent of GDP from 5.3 percent in 2012; to 4.5 percent from 3.0 percent in 2013 and then impose a 2.8-percent goal for 2014.But the euro zone aid comes at a cost.Spain has to present a new austerity plan for 2013 and 2014 by the end of this month.

Euro zone financial chiefs agreed June 9 on the banking loan for Spanish banks, crippled by bad property-related loans, and they plan to create a single banking authority to eventually inject the capital directly.And as part of that banking aid, the euro zone insisted that Spain’s progress on cutting its deficit and reforming the economy would be “closely and regularly reviewed” in parallel with the banking sector.Street protests are already mounting over austerity measures in a country with a jobless rate of 24.4 percent.Coal miners, hundreds of whom marched from their northern pits to Madrid, were to join a major demonstration later in the day against subsidy cuts that they say will destroy thousands of jobs.

Violent clashes have broken out in more than a month of protests over Madrid’s decision to slash coal industry subsidies this year to 111 million euros ($142 million) from 301 million euros last year.Unions say the cuts will destroy coal mining, which relies on state aid to compete with cheaper imports, and threaten the jobs of around 8,000 coal miners and up to 30,000 other people indirectly employed by the sector.

Rally organizers say they hope more than 25,000 people will join the demonstration, after tens of thousands joined a preliminary march in Madrid on Tuesday evening, lit by the miners’ helmet lamps.Meanwhile in Portugal, a euro zone country which has been rescued by the European Union and International Monetary Fund, doctors and nurses began a two-day strike against cuts in the budget for health services. – Arabnews