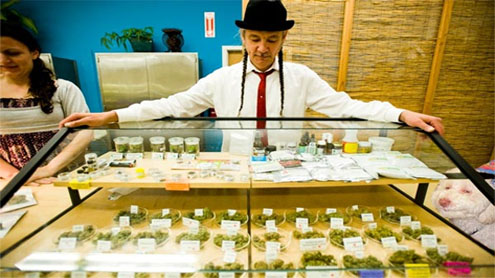 LOS ANGELES: Federal prosecutors have filed civil forfeiture actions against an Oakland medical marijuana dispensary that bills itself as the world’s largest, as part of a crackdown by U.S. authorities on California’s massive cannabis trade.

The lawsuits, filed on Monday in U.S. District Court in San Francisco, seek forfeiture of two properties where Harborside Health Center operates, said Melinda Haag, U.S. attorney for the Northern District of California.Harborside says it is the largest medical marijuana dispensary in the world, serving more than 100,000 patients in a “beautiful waterfront location,” and is subject of the Discovery Channel reality TV show “Weed Wars.”

“The larger the operation, the greater the likelihood that there will be abuse of the state’s medical marijuana laws and marijuana in the hands of individuals who do not have a demonstrated medical need,” Haag said in a statement on Wednesday announcing the actions.”The filing of the civil forfeiture complaints against the two Harborside properties is part of our measured effort to address the proliferation of illegal marijuana businesses in the Northern District of California,” she said.

In a statement on its website, the clinic said, “Harborside has nothing to be ashamed of, and will contest the Federal actions openly and publicly, with every legal means at our disposal.””We look forward to our day in court, and are confident that justice is on our side. Come what may, we shall continue to care for our patients unless we are physically prevented from doing so,” the statement said.Harborside also announced a news conference for Thursday morning to respond to the “federal attack,” saying that Oakland Mayor Jean Quan and other city, state and union officials would attend.

The action against Harborside is the latest in a crackdown on what federal prosecutors say is a flourishing network of illegal cannabis suppliers operating across California under the cover of the state’s medical marijuana law.The possession or sale of marijuana is illegal under federal law, which does not have an exemption for medical purposes.The drive by federal prosecutors to shut down dispensaries has caused friction between the U.S. government and California, which in 1996 became the first state to decriminalize medical marijuana. Sixteen states and the District of Columbia have followed suit.

California Attorney General Kamala Harris, in a November interview with The New York Times, said the federal campaign had “only increased uncertainty about how Californians can legitimately comply with state law.”Harris also said federal authorities were “ill equipped to be the decision makers as to which providers are violating the law.”Federal prosecutors say the dispensaries operate outside of California law, which permits only primary caregivers to dispense marijuana and bans sale of the drug for profit. – Yahoonews