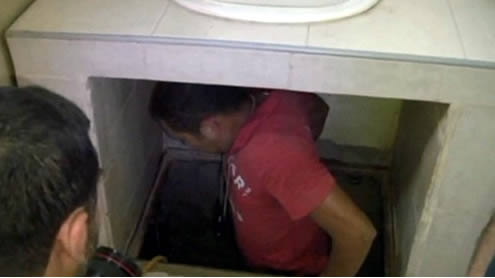 Two sophisticated tunnels probably built to smuggle drugs into the United States have been found on the border with Mexico.

The tunnels were more than 200m (656ft) long and had lighting and ventilation. A US agent said their design “wasn’t something that an ordinary miner could have put together”. More than 150 tunnels have been found criss-crossing the US-Mexico border since 1990; most were crude passageways. The first tunnel, discovered by the Mexican army on Wednesday, was still unfinished. It started underneath a bathroom sink in a warehouse in Tijuana. The second tunnel led from an ice plant in the Mexican town of San Luis Rio Colorado to a storage room in what officials described as a “nondescript building” in San Luis, Arizona.

It ran beneath the border at a depth of 16m (55ft) and was lined with plywood. Counter-narcotics agents believe it had not been in operation for long because there was little wear on its floor. Special Agent Douglas Coleman, of the US Drug Enforcement Administration, estimated that the tunnel cost $1.5m (£972,000) to build. Three people were arrested in connection with the Arizona tunnel. The use of underground tunnels for smuggling has increased in recent years as the US authorities have clamped down on overland smuggling activity. – BBC