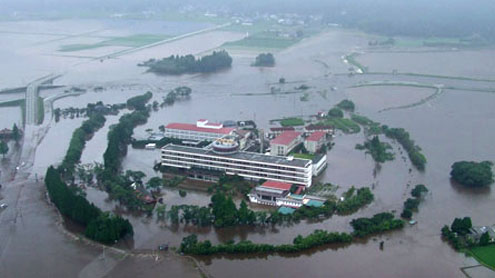 Thousands of people in southern Japan remain cut off by floods and mudslides triggered by torrential rains that have killed at least 26 people, local authorities say.

Evacuation orders issued a day earlier for a quarter of a million people were lifted in most areas on Sunday as the rains subsided, allowing many people to return home.But thousands remained cut off by landslides or fallen trees that blocked roads in mountainous areas.More than 3,000 people were left stranded in Yame, in Fukuoka prefecture in south-west Japan, where roads were cut off to seven districts, the Kyodo news agency reported. The Japanese military airlifted food by helicopters to stranded areas.

Local officials raised the death toll from the torrential rains in the northern parts of the Kyushu region to 26 and six people remain missing in Kumamoto, Oita and Fukuoka prefectures, Kyodo reported. Most of the victims were in their 70s and 80s.In Yame, a 70-year-old man died after being caught in a landslide, while another man died in Yanagawa, also in Fukuoka, after being retrieved from a car at an irrigation channel floodgate.In Kyoto prefecture, in west Japan, heavy rainfall flooded about 100 houses in both Kameoka and Kyoto, Japan’s old capital.The Japan Meteorological Agency said that the worst was over, but predicted more rain and thunderstorms in some areas into Monday. – Guardian