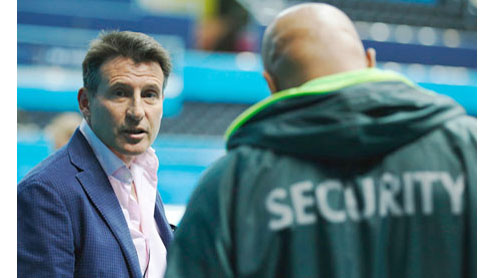 Olympic security not compromised by G4S

The failure of G4S to recruit enough guards for the Olympic Games has not compromised security, according to the London 2012 chairman, Lord Coe.

With less than two weeks to go before the opening ceremony, Coe said a “prudent and judicious” plan had been put in place as soon as it became clear G4S was unable to provide enough guards.”We will work very hard, we will remedy this. Security will not be compromised,” he said. “This is not about numbers, this is about the mix.”Last week the Guardian revealed that an extra 3,500 troops were needed to plug gaps in security provision, after G4S admitted it had been unable to provide the 10,400 guards it had been contracted to deliver.

Coe told the BBC: “I can’t put it more simply than this: G4S expected people to materialise and when they didn’t, as the home secretary has said, we moved very quickly to fill that gap.”On the BBC’s Andrew Marr programme, the culture secretary, Jeremy Hunt, said it was “completely normal” for a contractor to fail to deliver on a major project.He refused to criticise G4S, saying it had acted “honourably” by raising with the government the problems it was experiencing.

He said the government had “of course been monitoring the situation with G4S, and their management told us right up until last week that everything was on track. But we’ve had that contingency plan for many months and we are just very lucky to have fantastic armed services who can come when we need them and they will do a brilliant job.”Home Office ministers were warned about security issues surrounding the Games 10 months ago. HM Inspectorate of Constabulary raised its concerns in a confidential report in September 2011 after a number of inspections to test that the security plans of Locog, the Games organising committee, were on track.

The Home Office said HMIC had not carried out an investigation into G4S, and the issues flagged by HMIC had all been dealt with by February.On Friday the home secretary, Theresa May, told the Commons she learned of the security shortfall only last week.Reports that the security minister James Brokenshire attended daily senior-level Olympics security meetings were incorrect, the Home Office said. A spokesman said the meetings with department officials, G4S and Locog over the past three weeks were not focused on the G4S recruiting problems.

G4S stands to lose up to £50m over the staff shortfall. The chief executive, Nick Buckles, who faces a grilling from MPs next week, has said ministers and Locog have been kept fully informed of what was happening and said the company had been “fully transparent” about the difficulties it encountered.”We accept that we underestimated the task of supplying staff for the Olympics. We deeply regret that,” he said. He was “very sorry” that 3,500 extra troops had had to be drafted in at the last minute.

Keith Vaz, chairman of the home affairs committee that will question Buckles on Tuesday, warned there could also be long-term consequences for the firm’s lucrative relationship with the public sector.He questioned whether the G4S staff would be up to the job, after Buckles was unable to confirm in television interviews that they would be able to speak fluent English.

G4S originally signed a contract with Locog to provide 2,000 security guards, in a deal worth £86m. After a review of security requirements that number was raised to 10,400 in December, and the value of the contract more than trebled to £284m.Buckles said it had proved to be a highly complex operation recruiting so many people for a relatively short period of time.The shadow Olympics minister, Tessa Jowell, said there were “hundreds of questions” to be asked about what had gone wrong but the postmortem examinations should wait until after the Games were over. – Guardian