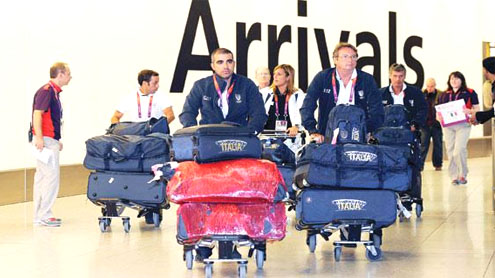 LONDON: The Olympic Athletes’ Village opened its doors yesterday to the first competitors as the logistical operation to handle the arrival of thousands of athletes and officials shifted into a higher gear.

Questions remained though about the recruitment of security staff after Britain was forced to draft in 3,500 troops to make up a shortfall in private guards.London’s Heathrow Airport was handling a record number of passengers, with the Olympics arrivals swelling numbers to almost 237,000 at the west London hub, compared to 190,000 on an ordinary day.The first priority “Games Lane” went into operation on the M4 motorway leading from Heathrow, designed to allow athletes and officials to be whisked to their destinations without becoming snarled up in London traffic.

At Heathrow, operator BAA said waiting times had been reduced to within targets set by the interior ministry since extra staff were put in place on Sunday after queues of several hours at passport control in recent weeks.For the athletes, more than 500 volunteers, speaking more than 20 languages between them, welcomed groups as they landed.The Netherlands women’s beach volleyball team flew in from Amsterdam in a blaze of orange tops and said they were impressed by the setup.

One of the players, Marleen van Iersel, 24, told AFP: “From the moment we walked off the plane there were people helping us straight away. It is very well-organized.”A large US contingent arrived at Heathrow earlier, including members of the sailing teams.At the Olympic Park in Stratford, east London, the village was ready and waiting to welcome its first inhabitants.Competitors and officials will be accommodated in 2,818 apartments across 11 residential blocks, each built around a courtyard offering athletes private areas to relax.

Organizers could do nothing though about the grey skies and persistent drizzle in London as athletes got a first taste of their home for the next three weeks.The Australian team had already taken over several balconies of one block, with a banner reading “Aussie, Aussie, Aussie; Oi, Oi, Oi” spread across them.The furor over the private security firm G4S showed no signs of abating, despite insistences from ministers that the Games would be secure.

Organizers were expected to tell the government on Monday whether they need even more troops on top of the 3,500 drafted in last week when it became clear that G4S could not provide all the security staff it had promised due to recruitment and training problems.Culture Secretary Jeremy Hunt defended G4S from criticism, even insisting it was “completely normal” for firms to break their contractual commitments on large projects.But shares in the company dived 10.0 percent in early trading in London.

Jacques Rogge, president of the International Olympic Committee (IOC), insisted the deployment of extra military personnel, bringing the total number of servicemen involved in the Games to 17,000, had given him peace of mind.The London organizers “have put on a good show of flexibility,” he told journalists in a telephone conference.“Extra soldiers gives extra tranquility,” he added.What was billed as the biggest anti-doping operation in Olympic history also got under way on Monday.

Half of all competitors will be tested with a team of 150 scientists taking more than 6,000 samples between now and the end of the Paralympic Games on September 9.Meanwhile, the first complaints about the transport came from two-time world 400 meters hurdles champion Kerron Clement, who claimed the bus ferrying him and his US teammates from Heathrow to the Athletes’ Village had taken four hours.Clement tweeted: “Um, so we’ve been lost on the road for 4hrs. Not a good first impression London.“Athletes are sleepy, hungry and need to pee. Could we get to the Olympic Village please.”