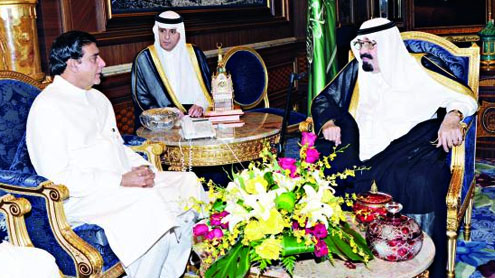 Custodian of the Two Holy Mosques King Abdullah held talks in Jeddah yesterday with Pakistani Prime Minister Raja Pervez Ashraf, who expressed confidence Saudi-Pakistani ties would flourish as a result of his visit.

Earlier addressing the Pakistani community in Jeddah, the prime minister highlighted strong Saudi-Pakistani relations. He said Saudi Arabia has always supported Pakistan in its difficult times. He added: “Both the countries have a common stand on almost all regional and international issues.”He thanked King Abdullah for giving him an opportunity to meet him. “The king has great love for Pakistan and has supported Pakistan and its people in all difficult circumstances.” He said Pak-Saudi relations are very strong and based on love, affection and care for each other and hoped this relationship would be further strengthened in future.

Ashraf urged Pakistanis living in Saudi Arabia to play their part in boosting the relations between the two countries.He called on Pakistanis living abroad to investment in power generation projects in Pakistan, especially in solar energy, to overcome an energy crisis in the country. He pledge full protection to foreign investment in all fields, especially in the energy sector.

The prime minister appreciated the contribution of Pakistani expatriates to the country’s economy through their remittances. He added: “These 1.5 million Pakistanis living in Saudi Arabia are making a positive contribution to the economic activities of Pakistan.”He said the Pakistan People’s Party has been working on granting expatriates the right to vote. – Arabnews