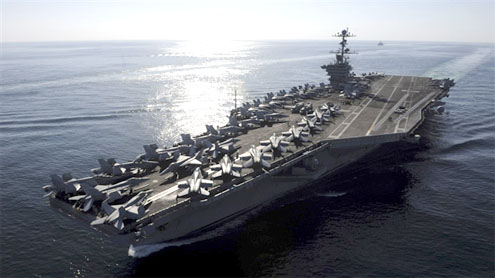 The Pentagon is sending the aircraft carrier USS John C. Stennis to sea four months ahead of schedule to ensure that there are at least two carriers in the Middle East.

The U.S. Navy has had two carriers operating in the Middle East for quite some time. It usually rotates one of the two carriers into the Persian Gulf for several weeks at a time while the other operates in the Arabian Sea, providing air support for the war in Afghanistan.Today, Pentagon spokesman George Little confirmed that Defense Secretary Leon Panetta has agreed to a recent request from U.S. Central Command to maintain a two-carrier presence in the Middle East.

In September the U.S. was going to go down to one carrier, as the USS Enterprise would not be replaced after it left the region. To prevent that from happening the Stennis has had its deployment orders changed from the Pacific to the Middle East.Little says the Stennis is being sent so that there is no gap in between two carrier assignments to the region. Also being sent on the deployment will be the cruiser USS Mobile Bay.

Little said the need to send the carrier early was “not a decision based solely on the challenges posed by Iran.”On Sunday, the USS Eisenhower replaced the other carrier in the region, the USS Abraham Lincoln, which is headed to Norfolk for maintenance work.

In order to make the Stennis/Enterprise swap possible, the Enterprise’s deployment will be extended for what officials say will be “a few days.” It also means the crew of the Stennis will be out to sea for longer than they had expected. Originally slated for a four-month Pacific Ocean deployment, the Stennis will now leave four months early to serve a seven month deployment that will last through April 2013. – Yahoonews