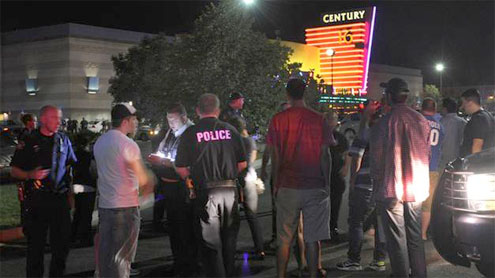 It took James Holmes just two minutes to kill 12 people, injure 59 and upend the lives of hundreds of their relatives and loved ones. He carried out his grotesque mission with meticulous planning and astonishing speed.

The first of hundreds of emergency calls were received at 12.39am local time. Within 90 seconds police had scrambled to the Century 16 multiplex in Aurora, but by then it was already too late.They found Holmes standing beside a white Hyundai car that he had parked beside an exit door at the back of the cinema. He had with him three guns – a AR-15 military style semi-automatic assault rifle, a 12-gauge Remington shotgun, and a .40-caliber Glock handgun. A second Glock was found inside the movie theatre.

Holmes had joined the crowd of midnight revelers who had come to see the final instalment of the Dark Knight trilogy at its premier viewing. Four of the Century 16 theaters were simultaneously showing the film, and all were sold out.He bought a ticket for theater nine. But a few minutes after The Dark Knight Rises began rolling, he was seen leaving the auditorium.A US law official interviewed by the Associated Press said that Holmes then propped open the back door of the cinema and went out to his car, where he readied himself for the hurricane of violence he was about to unleash. He donned armoured clothing, all in black – a helmet, vest, metal protectors for his neck, leg and groin, and heavy gloves. He also put on a gas mask.

Looking like a member of a Swat team, as one eyewitness put it, Holmes slipped back in through the open door carrying at least three of the guns. By now Dark Knight Rises was about 10 minutes under way. On screen, Anne Hathaway was already fully engaged in a shootout, and the sound of make-believe detonations was filling the room.Eyewitnesses reported seeing Holmes re-entering the auditorium from a side door. Survivors said that the way he looked dressed in black and with a gas mask didn’t surprise them as much as might be expected, as there were several Batman obsessives who had dressed up in costume for the premiere.The masked man threw a couple of canisters to the ground, and there was a loud hissing noise as gas started to emerge and spread through the auditorium. Even then, some people thought that a special effects stunt had been arranged by the movie theater.

And then he pulled out a shotgun, aimed it at the ceiling and pulled the trigger. A shot rang out. Then he pointed at the back of the cinema and shot some more. There was no mistaking his deadly intent then.’We’ve got to get out of here’.James Wilburn, sitting in the second row of the theatre, told the Denver Post that he and his three friends instantly dropped to the floor in the hope of shielding themselves behind the seats in front. He watched as Holmes, just five feet away, emptied the Glock handgun of bullets and let it fall to the ground. Then he calmly grabbed the AR-15 semi-automatic rifle from his back and carried on shooting.

The police chief in Aurora, Dan Oates, could not say how many shots were fired in total. But he was clear about one thing: “There were many, many rounds. A lot of rounds were fired very rapidly.”How the shooter managed to discharge so many rounds in such a short period of time – inflicting such devastation around him – is likely to become one of the focal points of the investigation. A source told Associated Press that he had attached to the AR-15 a high-capacity, drum-style ammunition clip. Hospital officials said many of the injured had been hit with buckshot, suggesting the shotgun also contributed to the high number of wounded.

Jennifer Seeger told NBC television that when the carnage began she shouted at her friend: “We’ve got to get out of here.” But when they started to move she saw people fall around her as the gunman began silently making his way up the aisle, shooting anyone who was trying to escape ahead of him.”He shot people trying to go out the exits,” she said.At that moment, Seeger stared her own imminent death in the face. The shooter came towards her, saying nothing. The barrel of the gun was pointing directly at her face. “I was just a deer in headlights. I didn’t know what to do.”A shot rang out, but it was aimed at the person sitting right behind her. “I have no idea why he didn’t shoot me,” Seeger said.

Later, when she was safe, Seeger told her mother: “Mom, God saved me. God still loves me.”‘I thought it was pretty much the end of the world’.But first, she had to get out. She began crawling along the cinema floor, heading to the exit. There was a girl, about 14, lying apparently lifeless on the stairs in front of her. She passed a man with a bullet hole in his back.She checked his pulse, then tried to pull him out, but he was too heavy, and she couldn’t hang around. She could feel the gun casings hitting her leg after each shot. One casing burned her forehead. “I had to go. I was going to get shot.”

All around her there was blood and mayhem. The shooting went on and on. People were bleeding from their mouths, their legs, shrapnel was flying around the air, there was glass showering everywhere.”I thought it was pretty much the end of the world,” said Robert Jones, a survivor from theater nine.By then the room was full of smoke from the canisters. Pepper spray, people thought, or perhaps teargas. It made the eyes sting, then worse. “It was like a teargas,” said Naya Thompson. “I was coughing and choking and I couldn’t breathe.”

In the adjacent theater eight, the audience thought that it was just part of the film when they heard even louder shots ringing out next door. But then they could hear screaming, and as they came out to see what was happening people began to emerge on their knees or hunched up.Some lay motionless on the ground. Tanner Coon, 17, said as he rushed for the exit he tripped. “I slipped on some blood. I fell on a lady and told her, ‘We’ve got to go’. There was no response. I presumed she was dead.”

Outside the multiplex people began to gather, waiting for help. Shayla Roeder said she saw a young teenager sitting on the ground, bleeding. “She just had this horrible look in her eyes. We made eye contact and I could tell she was not all right.”Fire alarms blared out, sending their distress call out into the night. Ten people died at their scene, and two more in hospital. About 50 people were treated in hospitals throughout the Denver area, some suffering shrapnel wounds, others cut by glass.

Within minutes the area was swarming with Swat teams and ambulances, with about 200 police officers surrounding the crime scene. The lessons of the Columbine high school shooting, only 13 years and 15 miles away, had been learned: the emergency services were well prepared and co-ordinated. They even had a walkie-talkie system shared between all main services – something they lacked at Columbine back in 1999 on that terrible day when 12 school pupils and a teacher was killed.

It says something about America today that emergency personnel now pride themselves in coping with mass shootings.Holmes gave himself up to police in precisely the opposite manner to his conduct in theatre nine – peacefully and without incident.He told officers where he lived, and warned them it was booby trapped. The area around his third-floor apartment was evacuated, and bomb technicians mobilised to disarm what was presumed to be flammable or explosive material.

Oates said that incendiary devices and chemical elements were found, as well as “all sorts of wires”. The police chief said it could take hours or days to defuse the contraptions.The fire alarms were still blaring out at the Century 16 cinema hours after the shooting had ended. They were audible reminders of the trauma that has engulfed this suburban town, that will remain with its people for many years to come. – Guardian