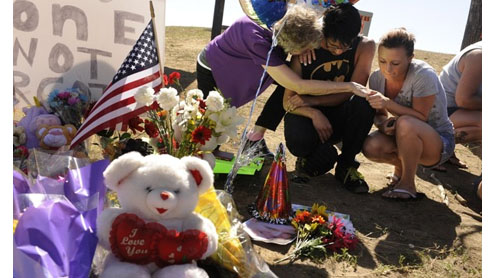 AURORA, Colo: Sunday was a day to mourn here — and ask, fruitlessly, why.Two days after a shooting rampage killed 12 people and wounded 58 in a movie theater, President Obama flew in to praise victims and survivors. And Colorado leaders held the first large public memorial service, asking a crowd of thousands to repeat “We will remember” after each of the 12 names.

Away from these rituals, new details emerged about the suspect, James Holmes, 24. Authorities said the gunman might have killed more if his assault rifle had not jammed. And he might have been mistaken for a SWAT officer by arriving police, had not one officer spotted something odd in his body armor.But these details did not answer the searching questions of the first memorial events.“Why did this senseless act of violence happen?” Aurora Mayor Steve Hogan asked, facing families of the dead and thousands of people standing behind them. “It may be impossible to arrive at an explanation that would make sense to us.”

Holmes, being held without bond at the Arapahoe County jail, is scheduled to appear in court for the first time Monday.“Aurora is strong,” said one handwritten sign at a makeshift memorial marked with 12 white crosses near the Century 16 movie complex, where the gunman burst into a midnight screening of the new Batman movie, “The Dark Knight Rises.”A large banner read “Angels Walk With Those Who Grieve.”

On Sunday evening, thousands of people filled a plaza in front of Aurora’s city hall for the vigil. The event blended familiar rituals of mass grief — American flags waved, and mourners laid flowers and lighted candles — with symbols of the young fan community that had gathered in the theater that night. One man held up a sign that combined the Batman bat silhouette with the “C” on Colorado’s flag. A woman paired the bat with a bright-red heart. “Hope Lives,” that sign said. Police officers watched from the rooftops.

Obama went to the University of Colorado Hospital in Aurora to meet with the families of victims. Ten of the victims are still being treated in the hospital, with seven listed in critical condition.Obama said he “tried to assure them that although the perpetrator of this evil act has received a lot of attention over the last couple of days, that attention will fade away. And in the end, after he has felt the full force of our justice system, what will be remembered are the good people who were impacted by this tragedy.”

Speaking at the hospital, he told a long anecdote about a 19-year-old woman who was shot in the neck and her friend, who refused to abandon her and who put pressure on the wound even as the gunman continued to fire. Such courageous young Americans, Obama said, “assure us that out of this darkness a brighter day is going to come.”Jordan Ghawi, brother of Jessica Ghawi, an aspiring sports reporter killed in the attack, tweeted Sunday: “Sat down with President Obama. He has been incredible. He too has agreed not to mention the shooter’s name.”Colorado is a swing state in the presidential election, but the candidates have pulled down their television ads. Obama chose not to attend the large memorial service later in the evening; he flew on to the West Coast. – WP