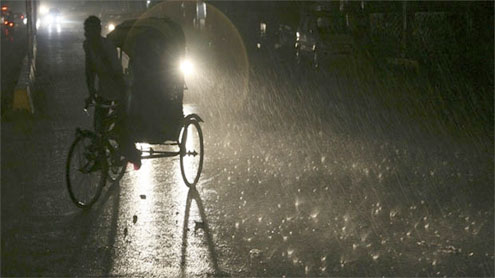 Scientists aided by supercomputers are trying to unravel one of Mother Nature’s biggest mysteries — the vagaries of the summer monsoon rains that bring life, and sometimes death, to India every year.

In a first-of-its-kind project, Indian scientists aim to build computer models that would allow them to make a quantum leap in predicting the erratic movements of the monsoon.f successful, the impact would be life-changing in a country where 600 million people depend on farming for their livelihoods and where agriculture contributes 15 percent to the economy. The monsoon has been dubbed by some as India’s “real finance minister”.

“Ultimately it’s all about water. Everybody needs water and whatever amount of water you get here is mainly through rainfall,” said Shailesh Nayak, secretary of the Earth Sciences Ministry.India typically receives 75 percent of its annual rain from the June-September monsoon as moisture-laden winds sweep in from the southwest of the peninsula.The importance of the recently launched five-year “monsoon mission” has been underscored by this summer’s patchy and below-average rains, which have provoked much anxious sky-watching and fears of drought in India’s northwest, even as floods in the northeast displaced 2 million people and killed more than 100.

Agriculture Minister Sharad Pawar cautioned this week that there was no need for alarm just yet, although he fretted that the monsoon was “playing hide-and-seek”.Working with counterparts in the United States and Britain, Indian scientists are trying to crack the monsoon’s “source code” using super-fast computers to build the world’s first short-range and long-range computer models that can give much more granular information about the monsoon’s movements.

This would help India conserve depleting water resources and agricultural output would get a boost as farmers would be able to plan their crops better. Armed with more precise forecasts, state governments would be better prepared, in theory, for disasters such as the recent floods in Assam.It would also bring more certainty to economic policy- making. Prime Minister Manmohan Singh’s government is gambling on a normal monsoon this year to boost weak economic growth.

Weather forecasting, however, is just one of the challenges facing India’s agricultural sector. Water conservation and proper irrigation remain a problem, agricultural policy-making is muddled and the government is under pressure to cut expensive diesel subsidies, which mostly benefit richer farmers.

More than half of the arable land in India, one of the world’s biggest producers of cotton, rice, sugar and wheat, is rain-fed. A successful monsoon means rural residents have more money to spend on everything from motorcycles to refrigerators.“We do feel under a lot of pressure,” said S.C. Bhan, senior scientist at the India Meteorological Office (IMD), when asked about the challenges the IMD faces in trying to correctly predict the monsoon’s movements.

The weather office publishes a forecast in April predicting how much rain will fall over the four months and whether the monsoon will be “normal”. It does this by comparing sea temperatures, wind speeds and air pressure with data from the past 50 years.In June, the forecast is updated to give monthly rainfall figures for July and August — the main growing months — as well as seasonal figures for four broad regions.Despite advances in computer weather models, the statistical model remains the most accurate long-range forecaster of monsoon rains, Bhan said.But only up to a point.

Many of the weather office’s long-range summer monsoon predictions last year were inaccurate. It also struggled to predict extreme weather events such as the drought in 2009 — a year when it had forecast normal monsoon rains.There is a lot the IMD struggles to predict — when the rains will arrive throughout the country, where exactly they will fall, which parts will receive the most and how long they will last. Short-range forecasts give more precision but offer only a five- to seven-day window into the future, which farmers say is too short.

The monsoon mission aims to extend those short-term forecasts to at least 15 days and enable the weather office to give much more detailed seasonal projections.“If anybody can tell me there is going to be a dry spell after initial showers that will make a lot of difference for me. It means life or death for farmers,” said P. Chengal Reddy, leader of a national consortium of farmers’ associations.Several farmers in Maharashtra state, already at the end of their tether and deeply in debt after buying fertiliser and seeds, reportedly killed themselves last month after rains abruptly stopped, farmers’ rights activist Kishor Tiwari said.

Many farmers ignore the weather forecasts and rely instead on astronomical almanacs and signs in nature.“We were able to guess from the nature of the croaking of frogs if there would be any rain in the near future,” said Trilocha Pradhan, 63, who farms about seven acres of rice paddy in the mostly agricultural state of Odisha. “Such croaking is rare today,” he added, blaming the effects of climate change. – Khaleejnews