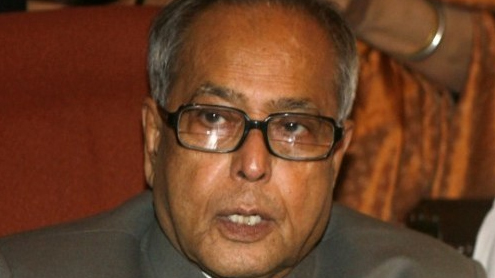 NEW DELHI: Former finance minister Pranab Mukherjee was elected Indian president on Sunday after votes from national and state lawmakers were counted in the race for the mainly ceremonial post.

Some analysts believe Mukherjee, a veteran from the ruling Congress party, may take a more active approach to the job than his predecessors as India struggles with a parliamentary deadlock and slowing economic growth. Mukherjee, 76, collected 69 percent votes, easily beating his only rival P A Sangma, 64, a former lower house speaker and tribal leader from the remote northeast who was backed by the main opposition Bharatiya Janata Party (BJP).  “I would like to thank the people of this great country for conferring this distinction by electing me to this high office,” Mukherjee told crowds of cheering supporters gathered outside his residence in New Delhi.

India’s president, who takes up residence in a 340-room palace built in the capital for the British viceroy during colonial rule, is chosen by legislators from the two houses of parliament and state assemblies. The next general election, due to be held in 2014, is predicted to be close, which could lead to a period of complex horse-trading between numerous national and regional parties trying to form a stable coalition government.  “It’s in this turbulent scenario Mukherjee as a president will be able to steer the ship of the state. He’s a troubleshooter,” said Sanjay Kumar, an analyst at India’s Centre for the Study of Developing Societies.

Mukherjee may also try to use the presidential position to foster a behind-the-scenes deal between warring parties who have reduced parliament to a stalemate in recent sessions. He has a reputation as a canny negotiator, and was described by leaked US embassy cables in 2009 as “the ultimate Congress Party fixer and operator” with clear ambitions at that time to become prime minister.  Mukherjee commands widespread respect across party lines, but his performance as finance minister was criticised for his failure to push through reforms to further liberalise India’s economy.

His exit from the ministry raised investors’ hopes that Prime Minister Manmohan Singh, who took over the finance portfolio, could embark on long-awaited moves. Mukherjee’s success on Sunday was a welcome victory for the embattled the Congress party, which has been beset by a string of graft scandals, policy reversals and a raft of disappointing economic data.  Sangma congratulated his opponent but criticised the Congress for running an “exceptionally partisan and political” campaign for the head of state. Mukherjee will be formally sworn in on Wednesday, taking over for a five-year term from Pratibha Patil, India’s first woman president. -Dailytimes