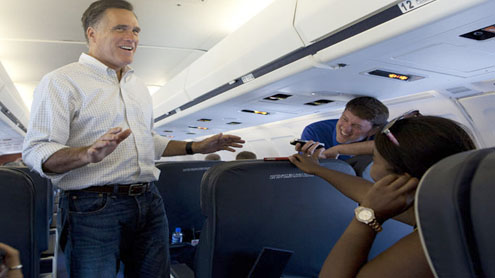 RENO, Nev: Republican presidential candidate Mitt Romney outlined Tuesday an assertive American nationalism that would guide his foreign policy, calling for a more aggressive posture in confronting the United States’ rivals and more consistency in dealing with its allies.

Romney advisers had billed the half-hour speech before the Veterans of Foreign Wars National Convention here as a major foreign policy address, one his campaign originally said he intended to give months ago. The presumptive GOP nominee has spoken little about foreign policy recently, but on Tuesday he did so sharply on an issue generally considered a strength of President Obama’s.

As he prepared to depart for a six-day trip to Europe and the Middle East, where he said he plans to refrain from criticizing the American president, Romney accused Obama of misjudging Russia, failing to contain Iran’s nuclear ambitions, coddling China, offending Israel and jeopardizing the U.S. military with budget cuts that Republican congressional leaders have supported.

The address, delivered with vigor, did not highlight the kind of specific policy approaches that Obama campaign advisers have called on Romney to present. At one point, Romney even endorsed Obama’s plan for withdrawing U.S. forces from Afghanistan by the end of 2014, a timeline he once criticized. He also detailed an approach to Iran’s nuclear program virtually identical to Obama’s.

But the address was long on the soaring language of American exceptionalism, and it echoed in places his campaign’s seminal foreign policy address, which he delivered last year at the Citadel. There, he called for a new “American century,” and he did so again in Reno before a largely receptive audience.

The lofty appeal to a mid-20th-century view of U.S. power stood in sharp contrast to Obama’s more calculated, realist approach to diplomacy. A Washington Post-ABC News poll published in May found that 48 percent of Americans supported Obama’s handling of foreign affairs, while 46 percent did not.“I am an unapologetic believer in the greatness of this country,” Romney told the audience to applause. “I am not ashamed of American power.”With the economy ailing, the Obama campaign has often presented the president’s foreign policy record as a proxy of leadership and competence.

His advisers have argued that he has been successful in restoring the nation’s image as a reliable global player, reinvigorating alliances neglected by his predecessor and engaging traditional antagonists. His winding down of two inherited wars — and the killing of terrorist leader Osama bin Laden — have been celebrated in campaign advertising and on the trail.

“It’s widely accepted that President Obama has an exceptionally strong record on national security issues,” Robert Gibbs, a former Obama White House press secretary who is now a senior campaign adviser, told reporters Monday in a conference call.“And I think, quite frankly, that Mitt Romney is having a rather tough time making an argument against the president of the United States on these issues,” he said. – WP