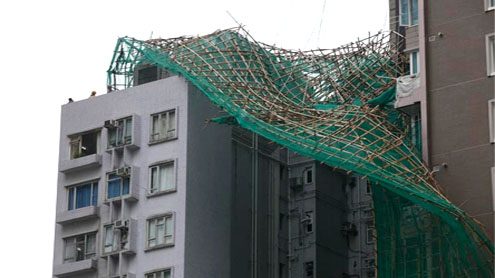 HONG KONG: Scores of people were injured and trees were ripped from the ground as a typhoon lashed Hong Kong packing winds in excess of 140 kilometres (87 miles) an hour, officials said Tuesday.

Authorities issued a hurricane warning for the first time since 1999 as Typhoon Vicente roared to within 100 kilometres of Hong Kong shortly after midnight, disrupting dozens of flights to the regional hub.The alarm was downgraded to a strong wind warning by mid-morning as the cyclone passed to the west and weakened over the southern Chinese coast.The storm brought down hundreds of trees and sent debris crashing into downtown streets as commuters made their way home from work on Monday evening, when people were told to seek shelter.Ferry, bus and train services were suspended or ran at reduced capacity, the port and schools were closed, and 44 passenger flights were cancelled. More than 270 flights were delayed.

The stock exchange was also closed for the morning but reopened in the afternoon after authorities gave the all clear to go back to work. “We haven’t experienced this for 10 years. I could hardly walk, the wind kept pushing me,” marketing research manager Alpha Yung, 28, told AFP as she went to work in the almost deserted streets. Mignon Chan, a 21-year-old marketing assistant, said the storm was “crazy”. “Last time I suffered this kind of weather I was small. It’s chaotic here, trees fell down, people fell down, but I still have to work. That’s the worst part,” she said. Almost 140 people sought medical treatment and 268 people took refuge in storm shelters, officials said. Seventy-one people remained in hospital including one who was in a serious condition.

Local media reported that more than 100 commuters stayed in the Tai Wai train station overnight, unable to get home after services were suspended.A landslide occurred in the upscale Peak neighbourhood but there were no casualties as a result, officials said. “The wind and rain were pounding on my windows at home last night — bam, bam, bam — they were so strong that I couldn’t sleep,” security guard Tony Chan said as he cleared shattered glass on the street outside an office tower.

Ocean Park tourist attraction said it would remain closed for the day to carry out a “thorough inspection” of the property for possible storm damage. In the nearby territory of Macau, three major bridges over the city’s harbour were closed overnight as the typhoon approached, the government said. Mainland offcials said the typhoon hit Taishan city in Guangdong province at 4:00 am (2000 GMT Monday). There were no immediate reports of casualties but officials said damage was still being assessed.

Team to give positive results in U-19 World Cup

Team to give positive results in U-19 World Cup