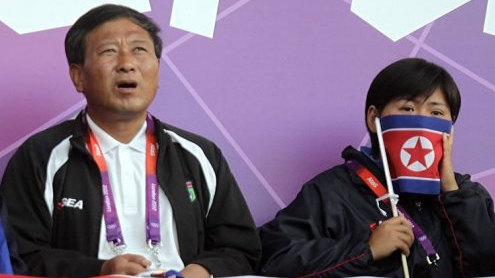 London’s Olympics got off to an embarrassing start when North Korea’s women footballers refused to play after a mix-up over their national flag, in one of a series of blunders.

Hosts Great Britain had kicked off the sports festival, years in the making and costing billions of dollars, with a 1-0 win over New Zealand as women’s soccer got under way two days before the opening the ceremony.  The United States beat France 4-2 and Japan overcame Canada 2-1. But North Korea’s opener against Colombia was held up after their players were pictured next to South Korea’s flag on the big screen at Glasgow’s Hampden Park.

The North Koreans were finally persuaded to take the field and the match, scheduled for 7:45 pm (1845 GMT), began at 8:50 pm. Red-faced organisers were quick to apologise for the howler.  “Today ahead of the women’s football match at Hampden Park, the South Korean flag was shown on a big screen video package instead of the North Korean flag,” said a statement from London 2012 organisers.  “Clearly that is a mistake, we will apologise to the team and the National Olympic Committee and steps will be taken to ensure this does not happen again.”

The incident — involving two countries still officially at war — ensured a nightmare debut for the 19-day Games, where the hosts’ capabilities are on show as thousands of athletes compete for 302 gold medals until August 12.  “Yes, we were angry because our players were introduced as if they are from South Korea, something that may affect us very greatly as you might know,” said North Korea coach Sin Ui-Gun.  “Winning the game cannot compensate this. It is a different matter. We hope there is no repeat in the next matches,” he added.  But it was not the only problem on Wednesday. Elsewhere, Team GB sent out an email referring to the Great Britain women’s football team as “England”.

And organisers had to offer a refund to diving fans whose view will be partially obscured due to a defect in the purpose-built, wave-shaped Aquatics Centre.  Separately, Greek triple-jumper Voula Papachristou was kicked out of the Olympics for a racist tweet which poked fun at Africans living in her country.  And athletics’ world governing body said 10 athletes had been barred for doping, including Morocco’s women’s 1500m runner Mariem Alaoui Selsouli who failed a test earlier this month.  Anti-drugs officials said the London Olympics would be most stringently patrolled Games yet, boosted by a sophisticated new test for human growth hormone.

“It’s a very significant step and it’s a very helpful one,” said World Anti-Doping Agency (WADA) Director General David Howman.  “Every step is significant if it ends up catching someone who has been cheating with impunity.”  At the Games, Usain Bolt is hoping for a second successive sprint treble, Michael Phelps needs just three more swimming medals to become history’s most decorated Olympian, and Roger Federer leads a galaxy of tennis stars.  China, who topped the medals table at the 2008 Beijing Olympics, arrived at the athletes village as thousands of competitors, coaches, officials and media poured through London’s Heathrow Airport and headed to Olympic Park.

“All athletes and teams are in good spirits and are performing their training every day as scheduled,” said China’s deputy chef de mission Xiao Tian.  Meanwhile, “Slumdog Millionaire” director Danny Boyle led a team of 10,000 participants in the full dress rehearsal for Friday’s hotly anticipated opening ceremony.  While details of the show — which has much to live up to after Beijing 2008’s lavish opener — are a closely guarded secret, it is expected to feature cows and sheep along with Sir Paul McCartney and David Beckham.-Yahoonews