Hugo Chavez in Brazil on first foreign trip in a year 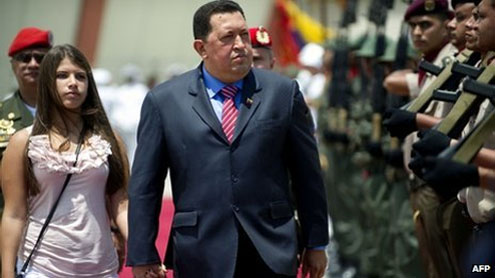 The Venezuelan president, Hugo Chavez, has travelled to Brazil on his first official trip abroad since being diagnosed with cancer over a year ago.

Mr Chavez will take part in a regional summit where Venezuela will become a member of the Mercosur trading bloc.He says he is now healthy and fit to run for a third term in October’s elections.He kept a low profile during his cancer treatment, travelling only to Cuba for medical reasons.The BBC’s Sarah Grainger in Caracas says Mr Chavez has increased his public appearances recently.”This trip is the latest sign that the president is cranking up his election campaign,” she says.

On his 58th birthday on Saturday, he spoke for several hours at a rally in one of the poorest neighbourhoods in Caracas, dancing, singing and sharing a birthday cake with party supporters.Many doubted that Mr Chavez would be able to recover from cancer, details of which have remained secret.But he always maintained that he would be ready to run in October’s vote.His campaign has focused not only on social and economic issues but also on reassuring voters that he is fully recovered.

To face Mr Chavez in the 7 October vote, the opposition chose a lawyer Henrique Capriles, 40, the former governor of Miranda state.In Brasilia, Mr Chavez will join the leaders of the Mercosur countries. Brazil, Argentina and Uruguay are full members, while Bolivia, Chile, Colombia, Ecuador and Peru have associate member status.Paraguay was suspended after President Fernando Lugo was impeached by the country’s Congress, in a process that took less than 48 hours and was deemed unfair by Mercosur leaders.

Venezuela has been attempting for six years to join the bloc, but its entry has been systematically vetoed by the Paraguayan Congress.Paraguay’s suspension opened the doors for Venezuelan membership.The move is controversial within the bloc and in Venezuela, where local farmers fear an influx of cheap agricultural products from Brazil and Argentina.Before boarding a flight for Brazil, Mr Chavez said that Venezuela took its huge oil and gas reserves into the South American bloc.He said that Mercosur already had “the leading producer of food on the planet, the largest reserve of biodiversity in the world, the largest fresh water reserves in the world.””It is the perfect equation; it lacked Venezuela.” – BBC