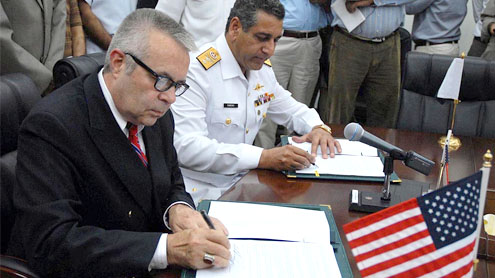 RAWALPINDI: Pakistan and the United States Tuesday signed a Memorandum of Understanding (MoU) to regularize the arrangements for the NATO supplies, which are currently based on “verbal understanding.”

The MoU was signed at the Ministry of Defense by US Charged’ Affaires Ambassador Richard Hoagland and Additional Secretary of the Ministry of Defence Rear Admiral Farrokh Ahmed.The agreement comes after hefty negotiations between the two sides after Pakistan suspended NATO supplies in protest to US army’s killing of 24 Pakistani soldiers near Pak-Afghan border.

The MoU, according to ministry’s statement to has been drafted under the light of the UN Charter and in line with the recommendations of the Pakistan parliament.Under the agreed terms, the supply of ammunition is not permitted but supply of weapons to Afghan National Army has been allowed. Also, the cargoes can transport food, medicines, and items of daily use to allied forces, fighting in Afghanistan.

Two routes will be used for the supply; one from Southern Port Qasim to Afghanistan through South-western Chaman border and the other from Port Qasim to Afghanistan through Northern Torkham Pass.The accord also introduces a concept of Central Coordination Authority, which would oversee the implementation of the pact. Accordingly, the agreement allows authorities to bar transportation of lethal equipment and inspection of the cargo.Pakistan resumed NATO supplies on July 3rd as the US apologized over the killing. – Onlinenews