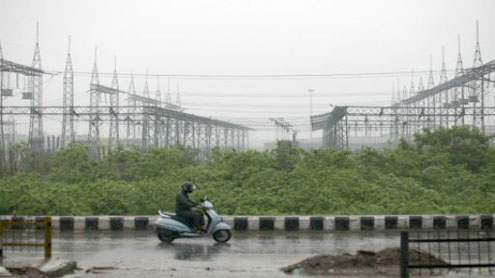 NEW DELHI:  Factories and workshops across India were up and running again on Wednesday, a day after a major system collapse led to a second day of power outages and the worst blackout in history.

An estimated 620 million people were left without electricity after India’s northern, eastern and northeastern grids cascaded into failure on Tuesday afternoon. It was the second massive outage in as many days, coming just after the country had recovered from Monday’s failure of the northern grid, which had left 370 million people powerless.Electricity workers struggled throughout the day on Tuesday to return power to the 20 affected states, restoring most of the system in the hours after the crash. India’s new Power Minister Veerappa Moily told reporters that by Wednesday morning power had been fully restored across the country.

Moily, who took over the top power position on Tuesday, said an investigation into the crisis has been launched and he did not want to point fingers or speculate about the cause.Other officials said the blackout might have been the result of states drawing too much power from the grid. Some analysts dismissed that explanation, saying that if overdrawing power from the grid caused this kind of collapse, it would happen all the time.The Confederation of Indian Industry said the two outages cost business hundreds of millions of dollars, though they did not affect the financial center of Mumbai and the global outsourcing powerhouses of Bangalore and Hyderabad in the south.

Like many, the group demanded the widespread reform of India’s power sector, which has been unable to keep up with the soaring demand for electricity as the economy has expanded and Indians grow more affluent and energy hungry.The power minister cautioned that there would be no quick solution to the power crisis, saying the government was looking at immediate and longer term measures to address power scarcity.Part of the problem is that India relies on coal for more than half its power generation and the coal supply is controlled by a near state monopoly that is widely considered a shambles.

A recent survey showed nearly all the coal-fuelled plants had less than seven days of coal stock, a critical level, and many of the country’s power plants were running below capacity, according to Samiran Chakraborty, head of research at Standard Chartered, a financial services company. Government bureaucracy has made it difficult to bring more plants online.In addition, vast amounts of power bleeds out of India’s antiquated distribution system or is pirated through unauthorized wiring.

Farmers, with a guarantee of free electricity that is driving many state electric boards to bankruptcy, have no incentive to conserve energy.The power deficit was worsened this year by a weak monsoon that lowered hydroelectric generation, spurred farmers to use pumps to irrigate their fields long after the rains would normally have come, and kept temperatures higher, keeping air conditioners and fans running longer. – Khaleejnews