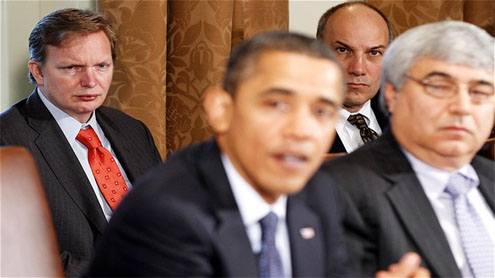 The White House was accused of breaking its own transparency rules after it emerged that senior officials went to elaborate lengths to conceal back-channel discussions with lobbyists.

Aides to President Barack Obama used personal email accounts to contact pharmaceutical companies and deliberately scheduled meetings in coffee shops away from the White House in order to skirt disclosure rules, according to a Congressional report on Wednesday.Among the most damaging findings are emails from Jim Messina – the former White House deputy chief of staff who now manages the president’s re-election campaign – to a drugs lobbyist in the days before Mr Obama’s health care reforms passed Congress in 2010.

In an email from his personal account, Mr Messina promised “I will roll [Speaker of the House Nancy Pelosi] for the 4 billion” needed to fund expansion of health care coverage. Mr Messina also promised the lobbyist he would deal with a reporter who had been questioning the White House’s links with the pharmaceutical industry.The report by the Republican-controlled oversight and investigations sub-committee also contained details of a proposed meeting between Jeffrey Smith, one of the president’s science advisers, and an executive from a technology company.

Mr Smith suggested meeting at a Caribou Coffee near the White House, explaining that meeting in his office would mean “you’d appear on an official WH Visitor List which maybe not [what] you want at this stage”.Representative Cliff Sterns, the sub-committee chairman, said: “What we have learnt from our many investigations is that, time and again, the Obama administration’s actions have failed to match the president’s lofty rhetoric on transparency.”The sub-committee did not accuse the White House of breaking the law but rather of failing to live up to its own claim of being “the most open and transparent administration in history”.

The White House declined to address the allegations directly, insisting that Mr Obama worked with “unprecedented openness in government”.In better news for the president, a new poll showed him leading his Republican challenger Mitt Romney in Ohio, Florida and Pennsylvania, three major battleground states.A Quinnipac/New York Times/CBS poll found that while voters were divided on whose policies would restore prosperity, Mr Obama remains personally popular and is considered more in touch than Mr Romney. Voters in all three states also gave him better marks than Mr Romney in terms of handling health care and national security. – Telegraph