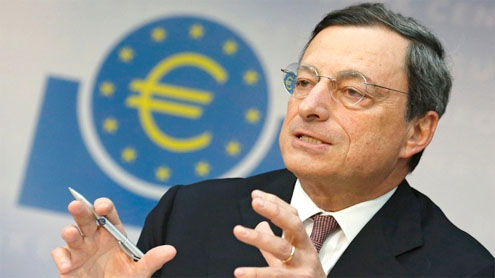 European markets have fallen after the European Central Bank president Mario Draghi said the bank would come up with ways to assist struggling eurozone countries “over the coming weeks”.

Analysts had been hoping for more details and immediate action.Help from the ECB would also only be given if the governments themselves made certain commitments, he said.The Spanish and Italian stock markets fell about 5% and both countries’ borrowing costs rose sharply.At a news conference at the ECB’s headquarters in Frankfurt, Mr Draghi said the crisis was worsening and the bank was ready to help countries facing high borrowing costs by buying their debts at lower rates than on the open markets.

“What we have expressed is guidance, and strong guidance, about strong measures which will be completed in the coming weeks,” Mr Draghi said. Hopes had been high of a more detailed announcement after Mr Draghi said last week that the central bank was ready to do “whatever it takes” to shore up the euro.However, there was no information on when the bond buying might start, how much it could spend, or for how long.”Once again, we have no commitment to action from the ECB, and no execution of promises previously made,” said Carl Weinberg, chief economist at High Frequency Economics.

“Traders and investors who expected immediate action are, and should be, disappointed. More scolding of governments, but no ECB action, is the bottom line.”High borrowing costs have been at the centre of the eurozone crisis. Previously countries have had to ask for bailouts when the yields on their 10-year bonds have been consistently above 7%, meaning that they could no longer afford to raise money on the international markets. Mr Draghi said that the high yields on some eurozone government bonds were unacceptable, adding that, “the euro is irreversible”.But after falling in recent days due to the anticipation of ECB support, Spain’s 10-year bonds rose above 7% after Mr Draghi spoke, having been at 6.6% before he started.

The yield on Italian 10-year bonds rose from 5.7% before Mr Draghi spoke to 6.2% afterwards.Some analysts were more positive about Mr Draghi’s comments.”This is a revolutionary policy, as far as the ECB is concerned. It means the ECB plans to go into the markets and buy bonds, of two to three-year durations, in very substantial quantities,” said Nick Parsons at National Australia Bank.”These are potentially unlimited and should be big enough to have the desired effect. Mr Draghi is certainly on the right track.”

At his press conference, Mr Draghi said that the ECB’s bond-buying process would resume, but that it would be different to the Securities Markets Programme (SMP), which involved buying large quantities of government bonds from banks and other financial institutions on the open market. Mr Draghi said that the new scheme would involve buying shorter-term bonds, which could allay some of the fears of the German government, worried about having to back the debts of weaker countries for years.Governments, however, would first have to apply for help from one of the eurozone’s rescue funds, the European Financial Stability Facility or the European Stability Mechanism, he said.

They would also have to demonstrate they were making necessary changes, Mr Draghi stressed.”Policymakers in the euro area need to push ahead with fiscal consolidation, structural reform and European institution-building with great determination,” he said.Currently, the European bailout fund – the EFSF – and its delayed sister fund – the ESM – would require any country seeking help to sign a memorandum of understanding, or promise to carry out certain measures such as cutting spending or raising taxes.

When asked whether Spain, and Italy would, therefore, have to submit to similar strictures imposed on Portugal, Ireland and Greece before the ECB could act to buy their bonds, Mr Draghi replied: “Yes, that is exactly how you should see it.”Spain, in particular, has been reluctant to ask for assistance beyond the loans for its banks that have already been agreed. This, analysts suggest, could create a stumbling block.After meeting Spanish Prime Minister Mariano Rajoy in Madrid, Italian Prime Minister Mario Monti said it was too early to say whether it would ask for assistance under these new proposals.

“We will have to examine the characteristics and see if we need it or not,” Mario Monti said.Mr Rajoy did not directly answer questions on the subject, but welcomed the ECB president’s comments.There were also signs of continued division on the ECB governing council.Asked whether the ECB’s decisions had been unanimous, he replied: “The endorsement to do whatever it takes to preserve the euro as a stable currency has been unanimous.””But it is clear, and it is known, that Mr Weidmann [ECB member and head of the German bank] and the Bundesbank have their reservations… about buying bonds.” – BBC