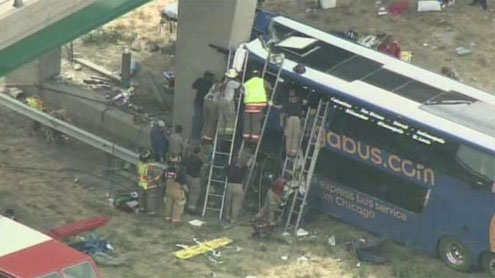 One woman has died and two dozen people have been injured after a double-decker bus crashed into a concrete bridge pillar in the US state of Illinois.

At least four people were airlifted to a trauma centre and more than 20 people were sent to another hospital.As many as 30 ambulances and 10 helicopters were called to the Interstate 55 crash, local media said.The Megabus coach, heading from Chicago for Kansas City, Missouri, is believed to have had 81 passengers on board.Interstate 55 was closed in both directions after the collision.

Initial reports suggested the crash may have been caused by a blown tyre.”We received a report it had blown a tyre which caused it to run off the road,” Illinois State Police Trooper Doug Francis said. “The bus did stay upright.”The bus collided head on with the bridge pillar in the centre of the motorway. Aerial footage of the crash site showed the front of the bus crushed by the impact.”There was a lot of screaming and crying,” passenger Baysha Collins, 16, told the Associated Press. “There was blood everywhere. I was just in shock.”

Rescuers had to climb up ladders to reach passengers trapped inside, including the woman who died, State Police Captain Scott Compton told the Chicago Tribune.The Memorial Medical Center in Springfield, Illinois, confirmed it had admitted six patients from the crash, including four who had been brought by helicopter.The St Francis Hospital in Litchfield, Illinois, said it received 20 patients after the crash, some of whom had been treated and released.

One man was sent to St Louis University Hospital with several bone fractures and Barnes-Jewish hospital in St Louis received another casualty, the Chicago Tribune reported.About 36 passengers were taken in school buses to a community centre in nearby Litchfield.Megabus, which began operating coach services in 2006, was last involved in an accident in September 2010, when four people were killed when a bus hit a low bridge in Syracuse, New York. – BBC