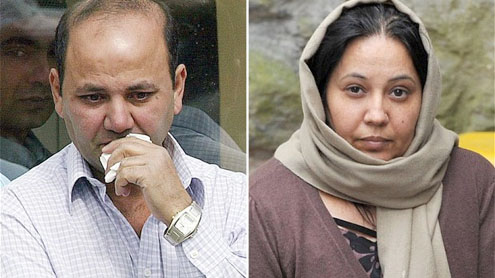 A Pakistani couple murdered their westernised daughter because they were more concerned about shame in their community than about their children, a judge said.

Iftikar and Farzana Ahmed, strict Muslims who are first cousins from the same village in Pakistan, were jailed for life after being found guilty of the 2003 honour killing of their “determined” and “ambitious” daughter Shafilea. They were told they would serve at least 25 years.They suffocated the 17 year-old in front of their four other children at their home in Warrington, Cheshire after she rejected a forced marriage in Pakistan.

The couple escaped justice for almost nine years, accusing officers of victimisation and stereotyping for suspecting them after her body was found months later in a river in Cumbria.  Mr Justice Roderick Evans, at Chester Crown Court, told her parents: “Although you lived in Warrington, your social and cultural attitudes were those of rural Pakistan and it was those you imposed upon your children.

He added: “Your concern about being shamed in your community was greater than your love of your child.”  Shafilea, who was born in Bradford and dreamed of being a lawyer, was always aware that her parents wanted an arranged marriage for her in Pakistan.Her father imposed his strict code despite having previously been married to a Danish woman, with whom he had a child and enjoyed drinking and discos. She left him after he married Farzana who was already pregnant.In her teens Shafilea regularly clashed with her parents over clothing, money and especially boyfriends.

In 2003, after she had run away, they drugged her and put her on a flight to Pakistan, to be married to a man ten years older. But while staying with her grandparents in rural Punjab, she deliberately swallowed bleach. Her throat was so badly damaged that she had to return home, preventing the marriage.  Back in Warrington Shafilea was regularly locked in her room, starved and beaten. On Sept 11 2003, Farzana picked her daughter up from her job. Seeing Shafilea in what she considered indecent clothes, she accused the girl of bringing shame on the family. At home, she pinned Shafilea down and told her husband in Punjabi: “Just finish it here.” The other children saw them force a plastic bag into her mouth and choke her to death.

The couple were arrested in December 2003, but when detectives held a public appeal for information, the Ahmeds gatecrashed and protested their innocence.Finally, in August 2010, police arrested Shafilea’s younger sister Alesha on suspicion of organising a robbery at the family home. Alesha, who is now 21, told officers that she had seen her mother and father kill Shafilea. During the trial the couple, with the support of three of their children, maintained their innocence.

But after eight weeks, Farzana changed her story, claiming her husband had been behind the attack and she had supported him out of fear.Shafilea’s brother Junyad remained loyal to his parents. The judge said: “I have no doubt that, as the result of the distorted upbringing and values to which you subjected him, he told his surviving sisters within minutes of them seeing Shafilea murdered by you that Shafilea deserved it.” – Telegraph