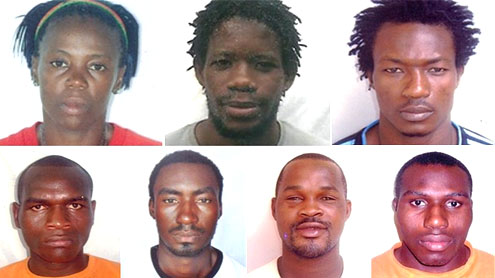 Several Cameroon Olympic athletes have disappeared amid fears they have fled the London 2012 Games to claim asylum, team officials have admitted.

The seven athletes, including the entire boxing team and half its swimming team, were reported missing earlier this week in a major embarrassment for the African nation.Authorities admitted on Tuesday that the five boxers, swimmer and a female football player were feared to have left in order to stay in Europe for “economic reasons”.Team officials informed the government about the possible defections on Monday night after rumours swept the Games Village, in Stratford, east London, that the athletes had gone missing.

Those reported missing include Drusille Ngako, 25, a reserve goalkeeper for the women’s football and 21 year-old Paul Ekane Edingue, who was one of two athletes representing the country in swimming.The boxing team comprised Thomas Essomba, 24, Christian Donfack Adjoufack, 28, Yhyacinthe Abdon Mewoli, Serge Ambomo, both 26, and 27 year-old Blaise Yepmou Mendouo.  It is believed to be the biggest such defection of the Games.The group are not yet breaking British immigration rules after new accreditation rules, introduced to bypass normal visa procedures, meant all Olympic athletes, and their families, could stay in the country until early November.

Home Office sources also insisted that all athletes were “freely leave the Olympic Games village if they wish”.It is understood that none of the seven athletes have yet applied for asylum in Britain.Despite finding none of their personal belonging, officials suggested the group may have gone sightseeing or visited friends.But David Ojong, Cameroon’s head of mission to London 2012, confirmed officials’ fears that the group had absconded.

In an embarrassing letter to his government’s Ministry of Sports and Physical Education, he admitted the group had “disappeared” without explanation.”What began as rumour has finally turned out to be true,” he wrote. “Seven Cameroonian athletes who participated at the 2012 London Olympic Games have disappeared from the Olympic Village.”He said that out of the team’s 60 athletes, 28 had gone home, 24 were still in the village while the rest had possibly “defected”. He later held crisis talks with the Sports Minister Adoum Garoua at the Olympic village.

Mr Ojong said Ngako, was the first to disappear after she was not one of the 18 members picked following pre-Olympic training in Scotland early last month.The goalkeeper of Lorema, a Yaounde-based female football team, vanished after her team-mates left for Coventry for their last pre-Olympics match against New Zealand just days before the start of the Games.A few days later, Edingue, originally from Bomono, went missing before he was due to compete in the 50m freestyle. None of his personal belongings were later found in his room.The boxing team, who have all been eliminated from the Games, disappeared from the Olympic village on Sunday morning.

Essomba, from Ebolowa, competed in the 49kg category, Adjoufack, from Yaoundé, the country’s capital, in the 80kg and Abdon, from Etoa, was knocked out of the 60kg division,Mendouo, from Douala, the country’s biggest city, was a competitor in the above 91kg class while Ambomo, from Ngoksa, who competed in the 64kg.Four of the athletes were last seen at a team reception at the Royal Garden Hotel, next to Kensington Palace, west London, on Friday. The country has just two athletes left in competition.It is not the first time Cameroonian athletes have disappeared during international sports competitions.

At past Francophonie and Commonwealth games as well as junior soccer competitions, several Cameroonians have quit their delegation without official consent.In June, an Ethiopian torchbearer, Natnael Yemane, 15, also disappeared after he went missing from a hotel in Nottingham.Meanwhile three Sudanese athletes who hoped to compete in the Games were last month reported missing amid claims they would apply for political asylum.

Another competitor, thought to be a middle distance runner from an African country, also claimed he was being persecuted in his homeland after walking into a police station in Leeds.On Tuesday, a Home Office spokesman said: “We don’t comment on individual cases.”International Olympic Committee officials insisted they had not heard about the missing athletes.”We are unaware of it,” said Mark Adams, an IOC spokesman.A London 2012 spokesman referred inquiries to the Cameroon team, whose spokesman was unavailable for comment. – Telegraph