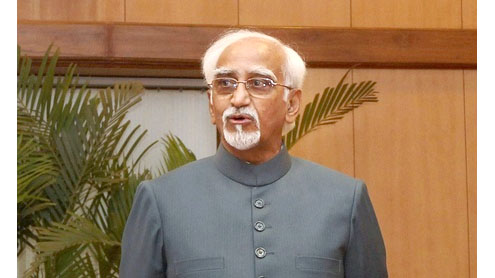 NEW DELHI: India’s vice president held off a challenge on Tuesday from a veteran Hindu nationalist politician to retain the country’s second highest constitutional post in elections held by lawmakers.

Vice President Hamid Ansari, 75, who took office as India’s 12th vice president in 2007, beat 74-year-old rival Jaswant Singh by 490 votes to 238 to retain the post for a second five-year term. Ansari, a Muslim, was backed by MPs from India’s ruling Congress party and its legislative allies while Singh, a former foreign minister was supported by the main opposition Bharatiya Janata Party (BJP) to which he belongs. Ansari’s win is the second political success for the Congress since July 22 when its former finance minister, Pranab Mukherjee, was elected president after routing BJP-backed rival Purno Sangma, a former lower house speaker.

Ansari is an ex-career diplomat and has written books on the Palestinian issue, Iraq and Iran. “No citizen is apolitical – as a citizen, by definition, has to take interest in public affairs,” Ansari declared when he first assumed the office of vice president in 2007. India’s vice president presides over parliament’s nominated upper house and can take temporary charge of the largely ceremonial presidency in the event that the incumbent dies, resigns or is impeached. – Dailytimes