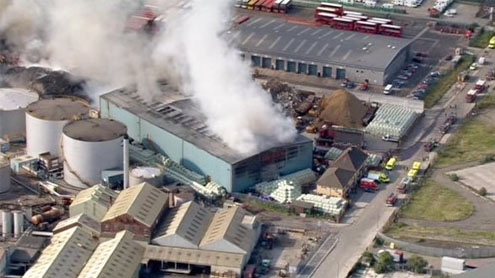 More than 200 firefighters and forty fire engines were called to east London on Sunday to tackle the “largest fire in several years”.

The blaze at a recycling centre in Dagenham began at 1.15pm on Sunday afternoon and at its height sent up a plume of smoke so large it was visible across the capital.Fire chiefs said the entire building, a single-storey facility on Chequers Lane measuring 50 metres by 100 metres or about the size of a football pitch, was alight.A spokesman said the fire had been brought under control by 6pm, but that crews were expected to remain at the site throughout the night. The cause of the fire has not been established yet.

Ron Dobson, London Fire Commissioner, said: “We’ve not seen a fire of this size in London for several years.”It’s certainly a dramatic end to the Olympics for the London Fire Brigade. That said though, we are still able to attend incidents across the capital and the fire cover we’re providing at the Olympic venues has not been affected. “We’ve got over 200 firefighters from across London working hard under challenging conditions to bring the incident to a close. Fortunately, we’ve not had any reports of injuries at this stage.

“I would like to reassure people that we are still able to attend incidents across the capital and the fire cover we’re providing at the Olympic venues has not been affected.”At this stage we aren’t sure how the blaze started as our focus is getting the flames under control. Fire crews will remain at the scene for as long as necessary and a thorough investigation will begin once the fire is out in order to establish how it started.”scThe recycling centre is about eight miles from the Olympic Park. Crews from Dagenham, Barking, East Ham and surrounding stations were sent to the scene. – Telegraph