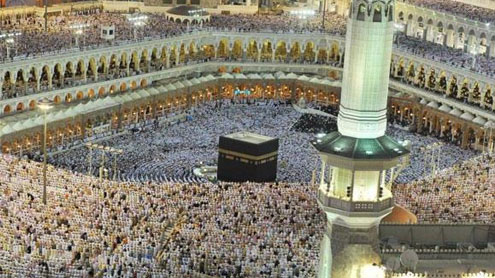 MAKKAH: More than two million Muslim faithful, including a large number of foreign pilgrims, attended taraweeh and qiyamullail prayers at the Grand Mosque in Makkah yesterday, despite the security arrangements for the Islamic summit.

A large number of worshippers had assembled at the mosque from the early hours of the day to perform Umrah and attend special prayers marking the Lailat Al-Qadr, a night that is better than a thousand months.Saudi authorities had made all arrangements to ensure the security and comfort of pilgrims who have come from different parts of the world.

The Presidency of the Two Holy Mosques made arrangements for the supply of Zamzam water while the Makkah  Municipality intensified its efforts to keep the city clean.Haram security forces maintained law and order inside and outside the Grand Mosque and prevented people from sitting in the walkways. They also helped pilgrims to reach the mataf (the circumambulation area around the Holy Kaaba) to perform Umrah.

Reporter’s Notebook: Dignitaries parse out wording in every issue

Reporter's Notebook: Dignitaries parse out wording in every issue