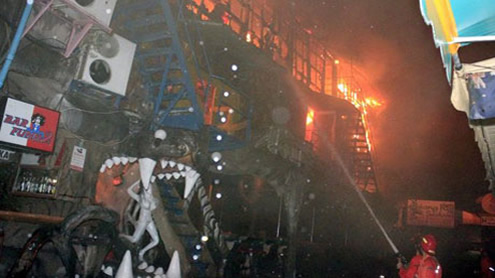 A fire at a nightclub in the popular Thai tourist destination of Phuket has killed four people and injured about a dozen others, police say.

The fire at the Tiger disco broke out early on Friday morning. Officials said it could have been caused by lightning striking a transformer. The nationalities of the deceased are not known, but reports say foreigners are among the injured. Thai nightclub safety has been in the spotlight since a deadly fire in 2009.

More than 60 people died in Bangkok after a fire broke out at the Santika Club in the early hours on New Year’s Day. Two men, including the owner of the club, were jailed last year. The Tiger club in the Patong beach area in Phuket is well-known among both tourists and locals.-BBC