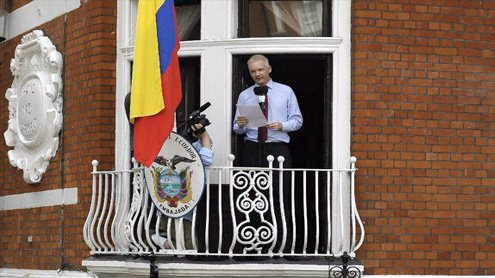 Assange speaks from a balcony at the Ecuadorean Embassy in London

There was no arrest. No escape. No surrender. No assassination attempt. No human smuggling. No helicopter or hovercraft. Just a wanted man, on a balcony with a microphone.

WikiLeaks founder Julian Assange emerged from a window onto a small balcony of the Ecuadorean Embassy on Sunday, where he made his first public remarks since being granted asylum. “I ask President Obama to do the right thing,” Assange, who’s been holed up in the embassy since June, said as he read a written statement. “The United States must renounce its witch hunt against WikiLeaks. The Unites States must dissolve its FBI investigation. The United States must vow that it will not seek to prosecute our staff or our supporters.”

A crowd of 200 gathered near the embassy to hear Assange speak as dozens of London police officers–who had created a wide barrier in front of the embassy–stood watch. On Thursday, Ecuador’s foreign minister announced that the country would grant asylum to Assange, defying threats by the British government to storm the Ecuadorean Embassy and extradite Assange to Sweden, where he is wanted for questioning in cases of alleged rape and sexual molestation.

“We have decided to grant political asylum to him,” Ricardo Patino said at the end of a long televised statement from the Ecuadorean capital of Quito, where he criticized the U.S. and U.K. governments for failing to protect Assange from political persecution. “The sun came up on a different world,” Assange said, “and a courageous Latin American nation took a stand for justice.” On Sunday, Assange did not address the allegations of sexual crime, or when the diplomatic standoff between Sweden, Ecuador and the U.K. might end.

Assange also called for the release of Bradley Manning, the former U.S. army intelligence analyst accused of leaking classified documents to WikiLeaks. “If Bradley Manning did as he is accused, he is a hero and an example to all of us and one of the world’s foremost political prisoners,” Assange said. Assange fears that if he were extradited to Sweden, he would immediately be extradited to the United States, which has condemned WikiLeaks’ publication of classified documents. Assange and his supporters say the U.S. would charge him with espionage; the U.S. has not said whether or not it would pursue charges against him.

The foreign minister said that Ecuador asked Sweden to promise it would not extradite Assange to the United States, but Sweden refused. It’s unclear what will happen to Assange now. U.K. authorities say his asylum is a violation of his probation, and he’ll be arrested if he tried to leave the embassy. “We will not allow Mr. Assange safe passage out of the United Kingdom,” British Foreign Secretary William Hague said at a press conference last week. “Nor is there any legal basis for us to do so. The United Kingdom does not recognize the principle of diplomatic asylum.”

On Sunday, Assange claimed that he heard police enter the embassy the night after he had been granted asylum. “Inside this embassy after dark, I could hear teams of police swarming up into the building through its internal fire escape,” Assange said. “But I knew there would be witnesses.” In 2010, Swedish prosecutors in Stockholm issued warrants to question Assange about alleged sex crimes involving a pair of former WikiLeaks volunteers.

Assange claims the charges are part of an international smear campaign stemming from WikiLeaks’ publication of diplomatic cables. After a brief international manhunt, Assange turned himself in to London police in December 2010. He was granted bail and placed under house arrest. After Assange’s appeals to fight his extradition to Sweden were denied, he fled to the Ecuadorean Embassy.-Yahoonews