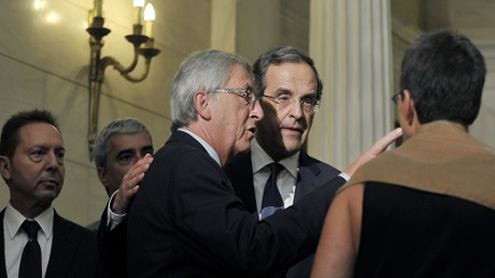 Greece’s hopes of being granted more time to hit the targets imposed by its international creditors have received a setback when EU leaders refused to make a decision until next month.

German chancellor Angela Merkel and Luxembourg prime minister Jean-Claude Juncker both warned that Greece’s future depended on the verdict of its troika of lenders, who will announce in September whether Athens is meeting the terms of its existing bailout programme. Juncker warned that Greece must cut spending and enforce meaningful structural reforms in return for ongoing aid. “The ball is in the Greek court – in fact this is the last chance and Greek citizens have to know this,” said Juncker, after discussing the crisis with Greek prime minister Antonis Samaras in Athens.

Samaras had earlier ratcheted up the pressure on eurozone leaders by warning that the country was “bleeding”. He used an interview with Bild, the German tabloid, to plead for Greece to be given two more years to bring its borrowings under control. “We have to crank up growth because that decreases the financial gaps. All we want is a bit of ‘air to breathe’ to get the economy running and to increase state income,” Samaras told Bild. Merkel, who will host Samaras in Berlin later this week, also refused to be bounced into a quick decision. “We won’t find solutions on Friday,” she said during a trip to Moldova.

Greek officials say that a two-year extension would not require a formal third bailout. The estimated €20bn cost could be funded by tapping an International Monetary Fund loan facility, more short-term debt, and by postponing debt repayments, they say. Economists, though, warn that such a delay would not resolve Greece’s woes. “Greece remains trapped in a self-defeating cycle of ongoing austerity and economic depression that make it unlikely that it will be able to repay its debt unless there is major further debt relief from its international lenders,” said Martin Koehring of the Economist Intelligence Unit.

The eurocrisis was also blamed for a slump in Japanese exports last month, pushing Japan into its biggest July trade deficit ever. That data, and fears that the eurocrisis could worsen, hit shares across Europe with the FTSE 100 falling 1.4%, or 83 points, to 5774.-Guardian