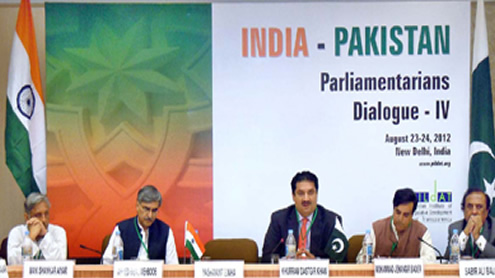 ISLAMABAD: It is a great fortune that India and Pakistan are neighbours that works in favour of each other, said the Speaker of Lok Sabha Ms. Meira Kumar who hosted the Pakistan delegation visiting India as part of the 4th round of India-Pakistan Parliamentarians Dialogue.

Our relationship goes back in history through civilisational bonds and beyond, she said. She was addressing the Pakistan delegation that called-on her on the sidelines of the 4th round of India-Pakistan Parliamentarians Dialogue that is taking place in New Delhi on August 23-24, 2012.  The Lok Sabha Speaker, while welcoming the delegation to the Parliament and in India, said that the Indian Parliament with 42 political parties represented in it represents the national consensus in India that the people of India want a stronger and peaceful relationship with the people of Pakistan.

She appreciated the PILDAT initiative to bring MPs of both countries to the dialogue table and said that Parliamentary engagement is committing the two countries to peacefully resolving all issues of mutual concern and interest. Earlier today, the 4th round of India-Pakistan Parliamentarians Dialogue was formally inaugurated at the Vigyan Bhavan, New Delhi. Senator Sabir Ali Baloch, Deputy Chairman, Senate of Pakistan (Balochistan, PPPP) and Mani Shankar Aiyar, Member, Rajya Sabha (Nominated, INC) initiated the proceedings of the 4th round of Parliamentarians Dialogue with their welcome remarks.

Pakistan Co- Chairs Honourable Senator Muhammad Jehangir Bader, Leader of the House, Senate of Pakistan and Honourable Khurram Dastgir Khan, MNA, Chairman, National Assembly Standing Committee on Commerce (NA- 96, Gujranwala-II, Punjab, PML-N) also spoke on the occasion. The MPs from both sides discussed the opportunities of deepening ties between the two countries specifically focussing on the issues of Visa Regime, the Role of Media, Education and Local Government.  The MPs also discussed the developments in the official Pak-India Dialogue.

On the second day of the dialogue on August 24, the MPs will discuss opportunities of collaboration in the area of Health while also developing recommendations on the future scope of the MPs Dialogue. In his welcome remarks, Ahmed Bilal Mehboob, Executive Director PILDAT, thanked the organizers of 4th round of dialogue on the Indian side including Yashwant Sinha, Former Minister of External Affairs and Mani Shankar Ayer, former union minister. Terming the two leaders as two great towers of strength for the Parliamentarians Dialogue, he said that both leaders have been associated with the organization of the Parliamentarians dialogues for the past 2 years.

Govt has no intention to block all unregistered SIMs immediately