Daraya massacre an ‘atrocity on a new scale’ 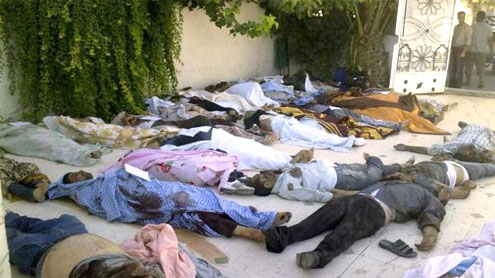 LONDON/ALEPPO, Syria: Britain said yesterday it was deeply concerned by emerging reports of a “brutal massacre of civilians” in a Damascus suburb that President Bashar Assad’s army recaptured from rebels over the past week.

Activist groups said on Sunday most of about 320 bodies found in houses and basements in the town of Daraya had been killed “execution-style” by troops.The London-based Syrian Observatory for Human Rights, said 32 more bodies, some of them of women and children, said 32 more bodies, including three women and two children, were found in the streets of Daraya on Sunday.The killings in Daraya, a working class Sunni Muslim town that sustained three days of bombardment before being overrun by the army on Friday, raised the daily death toll to 440 people on Saturday, one of the highest since the uprising began, another activist network called the Local Coordination Committees said.

It said and 633 people have been killed there since the government launched its assault last week.Activists uploaded several videos to the Internet showing rows of bloodied bodies wrapped in sheets. Most of the dead appeared to be young men of fighting age, but at least one video showed several children who appeared to have been shot in the head. The body of one toddler was soaked in blood.Due to restrictions on non-state media in Syria, it was impossible to verify the accounts independently.Britain’s Middle East Minister Alistair Burt said if confirmed, the massacre “would be an atrocity on a new scale requiring unequivocal condemnation from the entire international community.”

He added that it “highlights the urgent need for international action to bring an end to the violence, end this culture of impunity and hold to account those responsible for these terrible acts.”Burt said he had discussed the killings with UN and Arab League Joint Special Representative for Syria Lakhdar Brahimi.

‘Foreign conspiracy will be defeated’

A defiant President Assad said on Sunday the foreign “conspiracy” against his country would be defeated.“The Syrian people will not allow this conspiracy to achieve its objectives” and will defeat it “at any price,” Assad said during a meeting in Damascus with a top official from Iran, Syria’s chief regional ally.The official state news agency SANA said: “Our heroic armed forces cleansed Daraya from remnants of armed terrorist groups who committed crimes against the sons of the town.”

The Syrian leader has since March last year been trying through force to smother a popular uprising that has turned into a brutal civil war which has left thousands dead, seen more than 200,000 refugees fleeing to neighboring countries and 2.5 million in need inside Syria.
Assad, who met an Iranian parliamentary delegation in the capital on Sunday, said the crisis was the result of Western and regional states trying to crush Syria’s role in the “resistance” against Western and Israeli domination in the region.

“What is happening right now is not just a plot directed against Syria but the region as a whole, of which Syria is a foundational stone,” he was cited as saying by state news agency SANA.Pro-government television Al-Dunia said “terrorists” carried out the attacks, as it interviewed residents including traumatized children and showed a number of bloodied bodies lying in the streets.“Our valiant armed forces cleared Daraya of the remnants of armed terrorist groups which committed crimes that traumatised the citizens of the town and destroyed public and private property,” government newspaper Ath-Thawra said.

Meanwhile, the head of the Iranian parliament’s foreign policy committee, Aladin Borujerdi, vowed that Tehran will “stick by our Syrian brothers.”“We see Syria’s security as our security,” he said in Damascus, where he met both Assad and Vice President Faruq Al-Shara, Iran’s state-owned IRNA news agency said.

Clashes are raging across Syria as the 17-month-old rebellion grows increasingly bloody, particularly in the northern city of Aleppo, where the army and rebels appear stuck in a war of attrition.Fighting in Aleppo on Sunday was the heaviest in the past week, according to Reuters journalists on the ground.Fighter jets dropped bombs and fired missiles on rebel-held districts in the south of Aleppo, Syria’s largest city, as residents fled in panic. Reuters journalists there heard heavy explosions as clouds of black smoke rose a mile into the air.

Rebels say they control at least half the city of 2.5 million, but their hold is fragile as long as Assad’s forces can unleash their air power against fighters who are comparatively lightly armed.The uprising, which began as peaceful protests, has become a brutal civil war. United Nations investigators have accused both sides of war crimes but laid more blame on government troops and pro-government militia than on the rebels.

The Syrian Observatory for Human Rights said at least eight people were killed and dozens wounded on Sunday night when security forces shelled the southern town of Basra Al-Sham in Daraa province, with the death toll likely to rise as many of the wounds were severe.
In Damascus, government helicopters hovered near the main Abbaside Square on Sunday and fired rockets and machine guns at eastern residential neighborhoods where rebels continued guerrilla attacks against loyalists, residents said.

Haitham, an activist in Damascus, said troops were also firing machine guns from roadblocks that encircle the suburbs.“Ninety percent of the time they fire randomly at bystanders and homes. Rarely they hit rebels,” he said.

Jordan, meanwhile, appealed for increased international assistance to 160,000 Syrian refugees it is hosting.Information Minister Sameeh Maaytah said the refugee influx has swelled even further.The UN refugee agency said it has yet to secure half of the $190 million aid appeal launched earlier this year to support Jordan and other countries hosting some 200,000 registered Syrian refugees.

Saudi Arabia has sent truckloads of food and basic amenities earlier this month to Jordan for the refugees but the number had been swelling act day as fighting in Syria escalates.The United Nations estimates that more than 18,000 people have been killed in the conflict that pits a mainly Sunni Muslim opposition against a ruling system dominated by the Assad family — members of the Alawite faith, an offshoot of Shiite Islam.

Diplomatic efforts to stop the violence in Syria are stalled by a stalemate between Western countries, Gulf Arab states and Turkey — who all support the opposition — and Iran, Russia and China — who support Assad.With veto-wielding Russia leading resistance to action against Assad, the UN Security Council remains deadlocked. – Arabnews