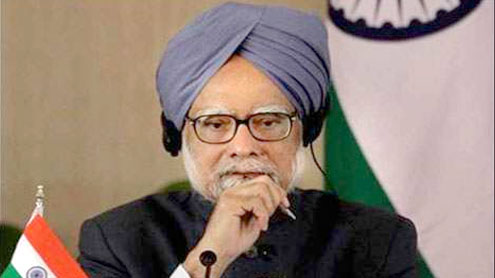 NEW DELHI: Indian lawmakers chanting “quit prime minister” drowned out Manmohan Singh on Monday as he sought to defend his government’s role in an affair dubbed “coalgate” that has paralysed parliament and created a sense of political crisis.

The controversy has stalled reform efforts at a time when the economy is suffering a sharp slowdown and investors are pressing for changes to rules to allow more foreign investment in the pension, retail, banking and insurance industries.“Coalgate” is a short-hand reference to a state auditor’s report published on August 17 that questioned the government’s practice of awarding coal mining concessions to companies without competitive bidding, potentially costing the treasury billions of dollars in lost revenues. “I wish to say that any allegations of impropriety are without basis and unsupported by facts,” said Singh, who is not expected to yield to the opposition’s demands for him to go.

Until Monday, Singh had been silent about the report, which partly covered a period when he was also coal minister. His silence has proven politically costly as it has allowed the opposition Bharatiya Janata Party (BJP) to control the narrative and keep the government on the defensive.While the state auditor’s report did not allege criminal wrongdoing by Singh’s fragile coalition government it raised concerns about the non-transparent practice of awarding coal blocks by an inter-ministerial committee, which it said unduly benefited private and state power and steel companies.

The report was fodder for noisy political theatre in India’s parliament on Monday, where BJP lawmakers and members of the ruling Congress party engaged in a shouting match. On the eve of a trip to Iran, Singh appeared in the lower house of parliament to offer a comprehensive four-page rebuttal of the main allegations in the auditor’s report but only managed to utter a few words before the din forced him to sit down. “Prime minister tender your resignation,” opposition lawmakers shouted. Singh was silenced by similar chants when he tried to deliver the same rebuttal in the upper house of parliament a few minutes later.

In his written statement, Singh denied his government had done anything wrong, blamed the delay in introducing competitive bidding for coalfields on resistance from major coal-rich states that were ruled by opposition parties and said the findings of the state auditor were “clearly disputable”. The last time coal blocks were allocated under the old regime was in 2008. New legislation means that in future allocations will be made by competitive bidding, though the modalities of the process are still being worked out.

The auditor general alleged that the government’s under-priced sale of coal blocks may have cost the exchequer potential revenues of $33 billion, although industry watchers and the government have cast doubt on this figure. Singh said the government had continued with the allocation system for coal blocks while preparing to make legislative changes to avoid “lower energy production, lower GDP growth and also lower revenues”. The BJP has disrupted parliament for more than a week, refusing to stop until Singh steps down. It is not yet clear whether it intends to pursue this strategy for the rest of the session, which ends on Sept 7. – Dailytimes