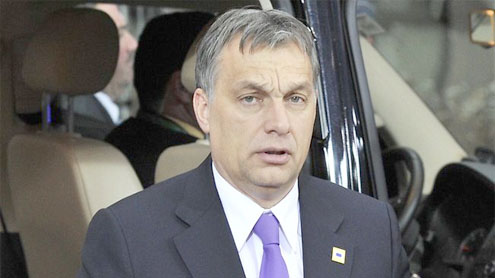 On his Facebook page, he said the list of the loan terms “contains everything that is not in Hungary’s interests”.Mr Orban said this included pension cuts and the withdrawal of a tax on banks.He said his government would present an “alternative negotiation proposal”.The IMF has not publicly commented on Mr Orban’s remarks.

The centre-right government in Budapest first announced that it would seek a new loan last November, backtracking on tough, anti-IMF rhetoric in the past, the BBC’s Nick Thorpe in Budapest reports.Talks began but collapsed almost immediately, our correspondent says.Since then, negotiations have resumed, and Mr Orban told reporters as recently as Wednesday that negotiations with the IMF, as well as the European Union, were on schedule.

Hungary’s economy is now in recession, although Budapest has been able to keep financing itself through bond sales.The government has said it is seeking a precautionary IMF loan for emergency funds.In 2008, Hungary was given a 20bn-euro standby loan to prevent it having to default on its debts. – BBC