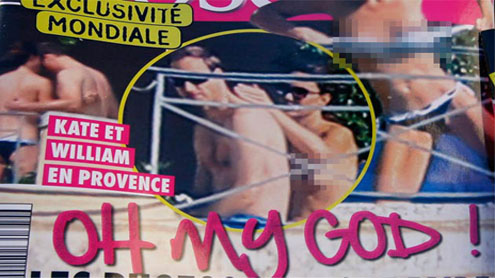 A tawdry Italian magazine owned by Silvio Berlusconi was today set to publish 50 photos of the Duchess of Cambridge topless – defying Palace pleas for restraint.

Unapologetic editor Alfonso Signorini said ‘not even a direct call from the Queen’ would stop him printing the pictures in a special 26-page edition of Chi magazine under the headline ‘la Regina è nuda’ – the Queen naked.Last night royal aides were desperately trying to establish if an 11th-hour injunction could be sought against publication of the photographs.Publications in the US, Germany and Australia were understood to be considering printing pictures.

Yesterday copies of French magazine Closer – which first used the pictures – were being sold on auction website eBay for £31, 25 times the retail price of £1.20.As the controversy escalated, the royal couple stoically continued their Diamond Jubilee tour yesterday, laughing as they met their hosts on the Solomon Islands.Mr Signorini remained unapologetic over his plans to publish the photos.Both Chi and the French edition of Closer are owned by Mondadori, part of former Italian premier Silvio Berlusconi’s media empire.

Mondadori’s chairman is Mr Berlusconi’s 46-year-old daughter Marina.Mr Signorini said he was not afraid of any legal action because the photos did not represent an invasion of privacy in his view.‘These pictures are not offensive or in poor taste, they are not morbid and they do not damage the dignity of anyone,’ Mr Signorini said.‘If I didn’t recognise the journalistic value of what I had and if I did not publish them I would be better off in a market selling artichokes.‘These pictures were taken while the couple were on a terrace and they were taken from a public place so there is no suggestion of an invasion of privacy. Whoever was passing by could have taken them.

‘I did not consult with Berlusconi before I decided to publish these photographs because I take the ultimate decision on what appears in Chi magazine – and to be honest Berlusconi has a lot more to worry about than Kate Middleton.’Six years ago Chi caused outrage when it published a picture of Princess Diana taken just minutes after the car crash in Paris which killed her and Dodi Al Fayed.It was the first time any publication had printed a graphic picture from the August 1997 tragedy.

Meanwhile the joint publishers of the Irish Daily Star both denied they had sanctioned its decision to publish the topless pictures on Saturday.The tabloid is jointly owned by Northern and Shell – which owns the Daily Express – and Independent News and Media.Yesterday both issued statements denying prior knowledge of publication and expressing regret.Former prime minister John Major backed Kate and William’s decision to take legal action over the pictures.‘The boundaries have plainly been crossed,’ he told the BBC’s Andrew Marr Show. ‘I don’t think we need minced words about these photographs – the way they have been obtained is tasteless. It’s the action of a peeping Tom. In our country we prosecute peeping Toms.’ – Dailymail