Western embassies on alert as anger simmers over film 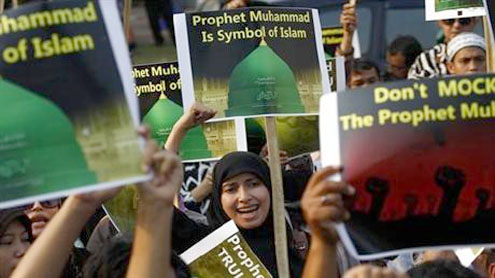 Western embassies on alert as anger simmers over film

DUBAI: Western embassies across the Muslim world remained on high alert on Sunday and the United States urged vigilance after days of anti-American violence provoked by an anti-Islam film.

Germany followed the US lead and withdrew some staff from its embassy in Sudan, which was stormed on Friday. Washington ordered non-essential staff and family members to leave its embassy there on Saturday. But the Khartoum government turned down a US request to send Marines to bolster security after the mission was attacked.

Non-essential US personnel have also been withdrawn from Tunisia, and Washington urged US citizens to leave the capital Tunis after the embassy there was targeted on Friday. Although protests that peaked on Friday largely subsided over the weekend, a small group of protesters burned a US flag outside the US embassy in the Turkish capital Ankara on Sunday. Riot police blocked the road, keeping them about 100 metres from the building. In Lahore, about 5,000 people gathered for a protest, chanting anti-US slogans, while in Karachi, police blocked off roads to the US consulate with shipping containers.

In Hyderabad, one person was killed and one wounded when unidentified gunmen opened fire at a protest against the film, and in the capital of Azad Kashmir, Muzaffarabad, about 300 protesters burnt an effigy of US President Barack Obama. The Pakistan demonstrations were however generally small compared to previous bouts of unrest.The violence is the most serious wave of anti-American protests in the Muslim world since the start of the Arab Spring revolts last year. It was fanned by public anger over a video, posted on the Internet under several titles.

The US ambassador to Libya, Christopher Stevens, and three other Americans were killed in Benghazi, Libya, last Tuesday. At least nine people were killed in protests in several countries on Friday.Some US officials have suggested the Benghazi attack was planned by militants using the video as a pretext.The crisis also presents Obama with a foreign policy headache as the campaign for the presidential election in November heats up.US Defence Secretary Leon Panetta said he hoped the worst of the violence was over but that US missions must remain on guard against any flare-ups. “There continue to be some demonstrations but it would appear that there is some levelling off on the violence that we thought might take place,” Panetta told reporters on his plane en route to Asia on Saturday.

The United States had deployed a significant force in the Middle East to deal with any contingencies and rapid deployment teams were ready to respond to incidents, he said.The foreign minister of Egypt, where hundreds of people were arrested after four days of clashes, assured US Secretary of State Hillary Clinton that US diplomatic missions would be protected.Canada closed its embassies in Cairo, Tripoli and Khartoum for the day on Sunday as a safety precaution for staff and the buildings, in the wake of attacks on several diplomatic premises. “We take the safety of our personnel and our missions overseas very seriously,” Canadian Foreign Ministry official Rick Roth told AFP.

He said Canadian authorities were monitoring events closely and taking appropriate security measures, but refused to give details on the latter. Canada’s decision to close its embassies in the capitals of Egypt, Libya and Sudan came a day after the United States withdrew all non-essential personnel from Sudan and Tunisia. – Dailytimes