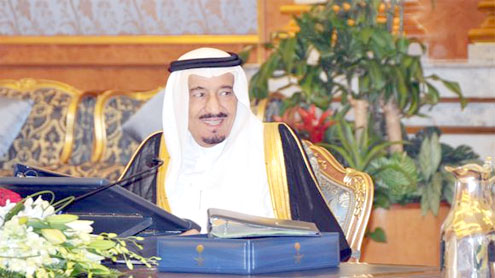 More than 299,000 Saudi men and women have joined the civil service during 2012 as a result of new employment programs introduced by Custodian of the Two Holy Mosques King Abdullah.

The figure was announced during the weekly Cabinet meeting yesterday.The Cabinet, which was chaired by Vice Custodian of the Two Holy Mosques Prince Salman, endorsed an agreement with Argentina for the peaceful use of nuclear energy which was signed in Riyadh on June 28 last year.Prince Salman earlier briefed the ministers on the messages he received and the talks he held with foreign dignitaries during the past week to strengthen bilateral ties and promote global peace and stability.

The Cabinet urged international organizations to take quick action to stop the flagrant human rights violations against the Palestinians in the occupied Arab territories while reviewing a report of the 21st session of the Human Rights Council in Geneva.Abdul Aziz Khoja, minister of culture & information, said the Cabinet reviewed a number of scientific, medical, cultural and economic activities that took place in the Kingdom during the past few days, including the opening of the Souk Okaz festival in Taif.

The Cabinet approved a memorandum of understanding between the Financial Investigation Unit at the Ministry of Interior with the Financial Transaction Reports and Analysis Center in Indonesia to exchange financial intelligence on money laundering and terror financing. The memorandum was signed in Yerevan on July 12 last year.The Cabinet endorsed a similar agreement with the Financial Investigation Agency of San Marino, which was also signed in Yerevan on July 12, 2011. It approved another accord signed with the Ministry of Foreign Affairs of Hungary that was signed in Riyadh on Oct. 4, 2011 for conducting bilateral political talks.

Khoja said the Cabinet approved an agreement with Ireland for the avoidance of double taxation and prevention of tax evasion, which was signed in Riyadh on Oct. 19, 2011. It endorsed a similar agreement with Malta, which was signed in Riyadh on Jan. 4, 2012.The Cabinet approved the appointment of Ali bin Saleh Al-Barrak, Muhammad bin Omar Al-Esae and Saud bin Abdul Aziz Al-Ansari as members in the board of directors of the Real Estate Development Fund for three years.