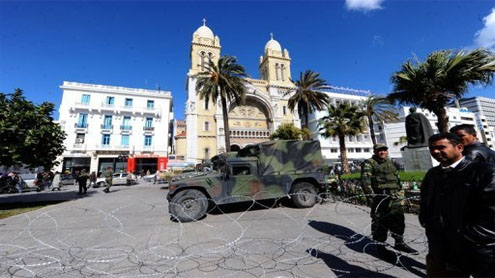 Security has been increased at France’s interests abroad after a French satirical magazine published obscene cartoons of the Prophet Muhammad.

French embassies, consulates, cultural centres and schools in some 20 countries will be closed for the next few days as a precaution.Government ministers voiced concern at the Charlie Hebdo cartoons but defended the freedom of the press.Riot police have been deployed around the magazine’s offices in Paris.The magazine has confirmed that its website has been attacked.ts paper edition features caricatures which play on both the uproar in the Islamic world over an amateur video which mocks Islam and the row over the publication in France of topless photos of the Duchess of Cambridge.

A tenet of Islam bans the portrayal of its founder, the Prophet Muhammad.Some 30 people have died in violent protests which erupted early last week over the Innocence of Muslims video, which was made in the United States.The dead include the US ambassador to Libya, Christopher Stevens, and three other Americans, who died in Benghazi. US and other Western embassies have come under attack in mainly Muslim countries.Foreign Minister Laurent Fabius said he was “concerned” at the cartoons and had ordered “special security measures… in all the countries where this [publication] could pose a problem”.The closures relate to possible protests following weekly Muslim prayers.

No list of countries affected was immediately available. However, the following measures have been put in place:

A statement about the cartoons on the French foreign ministry’s website quotes Prime Minister Jean-Marc Ayrault as saying “freedom of expression is one of [France’s] fundamental principles”, as are secularism and respect for religious convictions.”And this is why, in the current context, the prime minister would like to express his disapproval of any excesses,” the statement adds.

But US White House spokesman Jay Carney expressed concern at the decision to publish the cartoons, comparing them to the Innocence of Muslims video which caused uproar in last week.”We know that these images will be deeply offensive to many and have the potential to be inflammatory,” he said.”We don’t question the right of something like this to be published, we just question the judgement behind the decision to publish it and I think that’s our view about the video that was produced in this country and has caused so much offence in the Muslim world.”
‘Stupid provocation’

Muslim leaders urged calm in France, which has the EU’s largest Muslim community – about 10% of the population.”This is a disgraceful and hateful, useless and stupid provocation,” Dalil Boubakeur, rector of the Paris Grand Mosque, told the Associated Press news agency before meeting Mr Valls.Charlie Hebdo, known in France for its scatological cartoons, has caricatured other religious figures in the past, including a “Pope special” in 2008 which resulted in an unsuccessful court action accusing the magazine of inciting hate.

One of the milder cartoons in Wednesday’s edition, the cover image, shows an Orthodox Jew pushing a turbaned figure in a wheelchair, with the caption “You mustn’t mock”.Among the explicit cartoons inside, one clearly parodies the topless photos of the Duchess of Cambridge which appeared in Closer magazine, and resulted in an injunction on Tuesday.The editor-in-chief of the magazine, Gerard Biard, told the BBC’s World Have Your Say programme they had published the cartoons because the protests about the film were newsworthy.

“These publications will not cost lives,” he said. “Who killed people? We are not killing people, I’m sorry. We are not the violent ones.”Magazine editor Stephane “Charb” Charbonnier said earlier: “I’m not asking strict Muslims to read Charlie Hebdo, just like I wouldn’t go to a mosque to listen to speeches that go against everything I believe.”In November, the magazine’s offices in Paris were gutted by a petrol bomb attack after it named the Prophet Muhammad as its “editor-in-chief” for an issue. – BBC