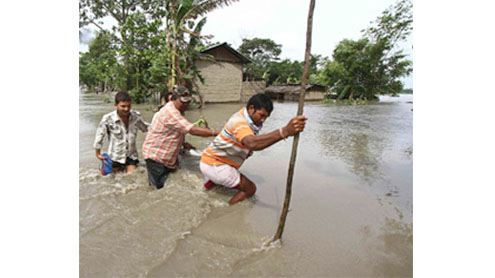 Floods and landslides caused by relentless rain in northeast India have killed at least 33 people and displaced more than a million over the past week, officials said on Monday.

Floods displaced nearly one million in that state alone, and many were now sheltering in camps or beside roads, which tend to be built above the land they pass through, a senior official in Assam’s disaster management authority said.Four people were buried and killed in mudslides in the state of Arunachal Pradesh, police said.

The military and federal disaster response teams have launched operations to move people to higher ground by helicopter or in rubber boats. Nearly 100 shelters have been opened to accommodate the displaced.In July, at least 110 people were killed and more than 400,000 people were left homeless in Assam during floods which Prime Minister Manmohan Singh said were among the worst in recent times.

Over the past 60 years, successive governments have built levees along most of the Brahmaputra, which is Assam’s main river and is fed by Himalayan snow melt and some of the world’s heaviest rainfall.But experts say the embankments are not only poorly maintained but are a discredited form of flood management.Floods have inundated three national parks in Assam including Kaziranga National Park, where two-thirds of the world’s Great One-horned Rhinoceroses live. Some animals have been forced out of the park to nearby hills. – Khaleejnews

‘Barfi!’ is India’s official entry for the Oscars

‘Barfi!’ is India’s official entry for the Oscars