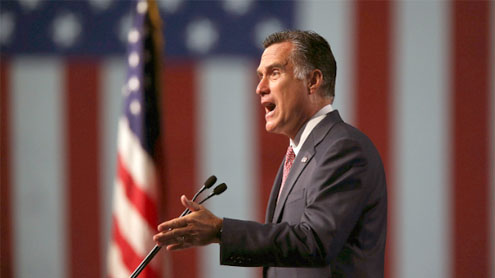 NEW YORK: President Obama will deliver a wide-ranging foreign-policy address Tuesday to the 67th meeting of the United Nations General Assembly, including a renewed warning to Iran to suspend its suspected nuclear program and will reflect on the recent violence in the Middle East, White House aides say.

As Obama plans to tout his foreign-policy vision, GOP nominee Mitt Romney and his surrogates are charging that the president is downplaying the tumult in the Middle East and downgrading the U.S. relationship with Israel.The meeting at the United Nations comes in the aftermath of the killings of four Americans — including Ambassador Chris Stevens — in Benghazi, Libya, earlier this month and as Israel Prime Minister Benjamin Netanyahu has increased pressure on Obama to clearly articulate the circumstances under which he would back military action to prevent Iran from obtaining nuclear weapons.Romney took aim at Obama for referring to the recent violence in the Middle East as “bumps in the road” on the path to a more stable and peaceful region. The president’s comments came in an interview that aired on CBS’s 60 Minutes on Sunday.

“Look, the world looks at the events going on,” Romney said at a campaign event Monday in Pueblo, Colo. “They don’t see these events as bumps in the road. These are lives. This is humanity. This is freedom.”The Obama campaign shot back that Romney was “misinterpreting” Obama’s statement.Romney “is making reckless statements about the death of four Americans in Libya, apparently for the sole purpose of his own political gain. Using this incident to launch political attacks should be beneath someone seeking to be our nation’s Commander-in-Chief,” said Obama campaign spokeswoman Lis Smith.

Romney supporters also seized on comments the president made in the same interview to argue that the U.S.-Israel relationship has diminished under Obama’s watch.In the interview, Obama called Israel “one of our closest allies in the region,” but Romney allies said that understates the primacy of the relationship.”Most Americans would say undoubtedly that Israel is our best ally in the region — the one that stands for the same things we do,” said House Majority Leader Eric Cantor. “For President Obama to say that Israel is on par with other allies in the region struck me as very, very concerning.”

White House spokesman Jay Carney said on Monday that Israel remains the U.S.’ “closest ally” in the region and the U.S. is committed to preventing Iran from obtaining a nuclear weapon.”The president was making clear that his commitment and this country’s commitment to Israel and Israel’s security is as strong as ever and unbreakable in nature,” Carney said of Obama’s 60 Minutes interview. “There’s obviously a lot of noise around this issue at times. His point was clearly that his objective is to take every step possible to enhance Israel’s security as part of our strong relationship with Israel.”

Unlike last year’s U.N. General Assembly gathering, when Obama packed in 13 meetings with other heads-of-state, the president has no one-on-one conversations with world leaders scheduled for this visit.On Monday afternoon, Obama and first lady Michelle Obama sat down for an interview with ABC’s The View, a daytime talk show, before hosting a reception for foreign leaders in New York. Prior to the U.N. gathering Tuesday, the president and Romney will each deliver remarks to the Clinton Global Initiative before returning to the campaign trail.Cantor questioned Obama’s decision not to meet with Netanyahu and other world leaders for one-on-one meetings, while in New York.

“It speaks volumes to the lack of seriousness that the president is taking the current situation,” Cantor said.The White House had previously said that Obama and Netanyahu will not be in New York at the same time and the prime minister did not request a meeting. Carney noted on Monday that Obama remains deeply engaged in foreign policy matters and has spoken by phone with the leaders of Egypt, Israel, Libya, Turkey and Yemen in recent days.

Obama and Netanyahu need to sit down to talk through Iran, said Aaron David Miller, a senior fellow at the Woodrow Wilson Center. But substantively there is little they can accomplish in a meeting on the sidelines of the U.N., particularly so soon after Netanyahu publicly criticized Obama for not setting red lines that Iran must not cross.”But the absence of meetings also symbolizes something else,” said Miller, a former adviser on Arab-Israeli relations to both Democratic and Republican administrations. “In the case of Israel, the problem lies in both a clash of personality and policy between Obama and Netanyahu.”