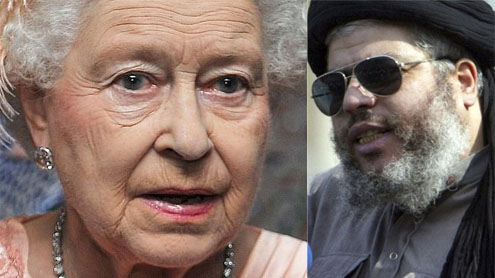 Britain’s BBC apologized to Queen Elizabeth on Tuesday after a senior journalist reported her private views about one of the country’s best known terrorism suspects, an embarrassing disclosure for a monarch who avoids public political statements.

BBC security correspondent Frank Gardner broadcast details of a private conversation with the queen during which she supposedly told him she had complained to the last government about radical Muslim cleric Abu Hamza al-Masri.The queen was said to be upset that Britain had not arrested him after he preached fiery anti-Western sermons outside a mosque in London after the Sept. 11, 2001 attacks in the United States.

That was awkward for a head of state who has no political or executive role and is expected to stay neutral in public. The queen has never given a media interview and typically avoids controversial topics in her speeches.The Egyptian-born cleric lost an appeal in the European courts on Monday and faces extradition from Britain to the United States. Washington accuses him of supporting al-Qaeda, aiding a kidnapping in Yemen and plotting to open a U.S. training camp for militants.

Delays in arresting the cleric angered many in Britain. Newspapers campaigned for his extradition, with the Sun using the headline “Sling Your Hook,” a reference to the metal hook he wore in place of a hand he lost in disputed circumstances.The public broadcaster, mainly funded by a fee paid by everyone under 75 who owns a television, said the meeting had taken place some years ago.“The conversation should have remained private and the BBC and Frank deeply regret this breach of confidence. It was wholly inappropriate,” the BBC said. Buckingham Palace had no comment.

A former banker, Gardner has worked for the BBC since 1997. He was partly paralyzed in 2004 after being shot on assignment in Saudi Arabia.Elizabeth holds a weekly private audience with the prime minister to discuss topical issues. There have been 12 prime ministers since her coronation in 1953, from Winston Churchill to David Cameron.Republic, a group that campaigns for the monarchy’s abolition, accused the royal family of a “cynical PR ploy” designed to win popular support.

“The decision to disclose this one conversation while keeping all else secret smacks of a deliberate PR stunt to put the queen on the right side of public opinion,” the group’s head Graham Smith said.After well-received celebrations to mark the queen’s 60 years on the throne this summer, the royal family has suffered two embarrassing episodes in recent weeks.Naked pictures of Elizabeth’s grandson Prince Harry at a Las Vegas hotel were published around the world, swiftly followed by topless photos of Catherine, Duchess of Cambridge – the former Kate Middleton who is the wife of Harry’s brother William, second in line to the throne. – Alarabiya