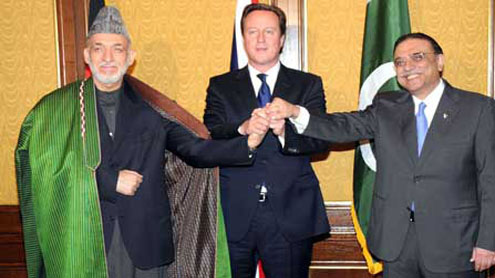 NEW YORK: The leadership of Pakistan, Afghanistan and United Kingdom Wednesday reaffirmed their commitment to continue to work for the goals of regional peace, stability and development and for the elimination of the scourge of terrorism from the region.

During the second round of Trilateral Summit of Pakistan, Afghanistan and the UK held here on the sidelines of the UN General Assembly session, President Asif Ali Zardari, President Hamid Karzai and Prime Minister David Cameron discussed the pressing issues in the fight against terrorism.President Zardari, while highlighting the importance of durable peace and stability in Afghanistan, underscored the need for an Afghan-led and Afghan-owned peace process in Afghanistan.

He said that Pakistan supports an intra-Afghan dialogue.The President said education, economic opportunities for the people of affected areas, and socio-economic development were effective tools to transform the environment.President Asif Ali Zardari and President Karzai appreciated the constructive role being played by the United Kingdom.Prime Minister Cameron reiterated the commitment of the United Kingdom to support Afghanistan and Pakistan in working out solutions for peace and stability in the region and in their quest for socio-economic development of their people.