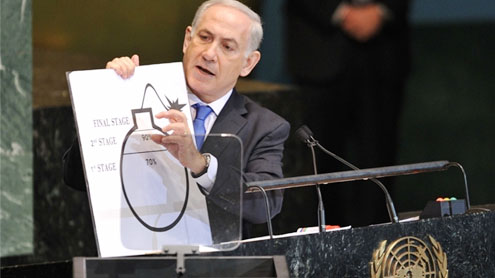 Israeli Prime Minister Benjamin Netanyahu said on Thursday the only way to prevent Iran from acquiring nuclear weapons was by setting “a clear red line” to stop its atomic program.

“At this late hour, there is only one way to peacefully prevent Iran from getting atomic bombs and that’s by placing a clear red line on Iran’s nuclear weapons program,” Netanyahu said in a speech at the U.N. General Assembly. “Red lines don’t lead to war; red lines prevent war.”“The hour is late, very late,” Netanyahu said, alleging Iran was already 70 percent of the way through the process of enriching enough uranium to fuel a bomb, and must be prevented from reaching the 90 percent level.

He said that by next summer, Iran will be on brink of having enough enriched uranium for a nuclear bomb.Israel has warned that it could launch military action against Iran in order to prevent it reaching a certain nuclear threshold, and has urged the international community to force Tehran to abandon its atomic quest.Iran denies it is building a nuclear weapon and has dismissed the Israeli threat.

U.S. President Barack Obama vowed in his address to the United Nations on Tuesday that he would prevent Iran from getting the bomb but his administration has repeatedly rejected imposing a red line on Tehran.“At stake is the future of the world,” Netanyahu said. “Nothing could imperil our future more than an Iran armed with nuclear weapons.”He recounted a long list of “terrorist” attacks which he blamed to Iran, and warned that “given this record of Iranian aggression without nuclear weapons, just imagine this aggression with nuclear weapons.

With relations between Netanyahu and Obama already viewed as frosty, U.S. Defense Secretary Leon Panetta earlier this month highlighted the policy split further when he rejected Israel’s “red lines” outright.Netanyahu said he was confident Israel and the United States could chart a way forward on how to prevent Iran from acquiring nuclear weapons.

“Israel is in discussions with the United States over this issue and I am confident that we can chart a path forward together,” Netanyahu said.Netanyahu, meanwhile, accused Palestinian President Mahmoud Abbas of slandering his country.“We won’t solve our conflict with libelous speeches at the U.N. We won’t solve our conflict with unilateral declarations of statehood,” Netanyahu declared, shortly after Abbas condemned Jewish settlement building as “racist.” – Alarabiya