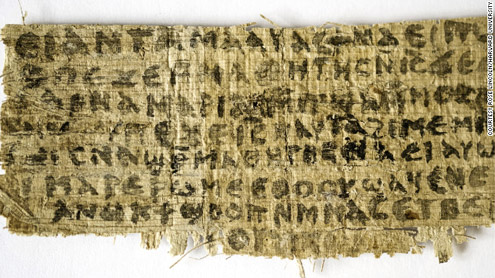 The Vatican on Friday appeared to push back on a recently publicized piece of papyrus that appears to show an early Christian referring to Jesus’ wife, with its newspaper calling the fragment “a fake.”

“Substantial reasons would lead us to conclude that the papyrus is actually a clumsy counterfeit,” the Vatican’s  newspaper, L’Osservatore Romano, said in a Friday editorial by the newspaper’s editor.“In other words, in any case it is a fake,” wrote L’Osservatore Romano editor-in-chief Gian Maria Vian.The fragment referring to Jesus wife was written in Coptic, a language used by Egyptian Christians, and says in part, “Jesus said to them, ‘My wife …”

The paper is generally thought to reflect the views of Vatican officials.5 Questions and answers about Jesus’ “wife”Harvard Divinity School professor Karen King announced the findings of the 1.5- by 3-inch honey-colored fragment earlier this month in Rome at the International Association for Coptic Studies.King was quick to add this discovered text “does not, however, provide evidence that the historical Jesus was married,” she wrote in a draft of her analysis of the fragment set to appear in the January edition of Harvard Theological Review.

“This fragment, this new piece of papyrus evidence, does not prove that (Jesus) was married, nor does it prove that he was not married,” King said in a conference call with reporters earlier in the month. “The earliest reliable historical tradition is completely silent on that.“So we’re in the same position we were before it was found,” she continued. “We don’t know if he was married or not.”In the accounts of Jesus’ life in the Bible, there is no mention of his marital status, while the accounts do mention Jesus’ mother, father and siblings.

Opinion: What fascination with Jesus’ “wife” tells us.The four Gospels – Matthew, Mark, Luke and John – tell the story of Jesus’ birth and early childhood then skip to his short, three-year ministry before detailing his death and resurrection.In its Friday editorial, the Vatican newspaper took aim at what it said was a media campaign to spread word of the papyrus despite questions about its authenticity.“American media outlets had been alerted, a preventive press conference by Karen L. King held to prepare a global scoop which was immediately put into question by the experts,” the paper said. – CNN